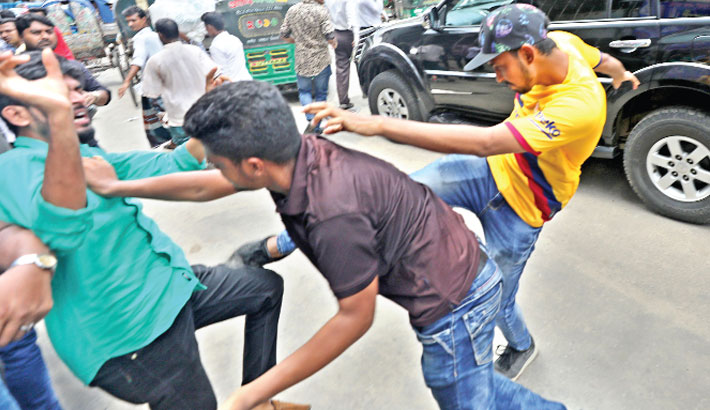 Leaders and activists of two factions of Jatiyatabadi Chhatra Dal (JCD) are locked in a clash over withdrawal of the age limit for formation of a new committee of the student organisation. —sun Photo

At least five home-made bombs were set off blasted near BNP Central Party Office at Nayapaltan in the capital on Monday while one was recovered unexploded.

Police could not confirm about those culprit behind the blast, but suspected that the aggrieved leaders and activists of Jatiyatabadi Chhatra Dal (JCD) might have blasted the cocktail.

Sources said that the blasts occurred when the agitated JCD men were leaving Nayapaltan in a procession.

In the procession they were chanting slogans to withdraw the age limit for formation of new JCD central committee, expulsion of 12 senior JCD men, and deferment of the July 15 JCD council.

Mamun Billah, vice president of the dissolved committee, told journalists that unknown men exploded the cocktails from behind their procession.

Some leaders, including former joint general secretary of the central committee Al Ashraf Mamun, sustained injuries in the cocktail explosions, he added.

He blamed other faction of JCD for the blasts.

Abu Sayeed, sub-inspector of Paltan Police Station, said that the cocktails were exploded while the agitated JCD men were leaving the party office chanting slogans.

He suspected that the marchers might have blasted the bombs.

However, about 100 leaders and activists  of the dissolved central committee took position in front of the party office at around 11:30am and staged a two-hour demonstration to meet their demands.

At one stage, they snapped the power connection to the BNP office and obstructed all from entering it till 1:30pm.

They also did not allow ex-JCD leaders and BNP organising sectary Fazlul Haque Milon to go to the office while beat a JCD leader as he tried to defy them.

Talking to reporters after their two-hour programme, ex-joint general secretary of the dissolved JCD committee Farroque Munna said that they would continue their movement until their demands were met.

Earlier in the morning, a group of JCD leaders and activists brought out a procession at Nayapaltan welcoming the announcement for holding the student body’s council.

Later, they along with leaders and activists of BNP’s different associate bodies took position inside the office to resist any untoward incident by the demonstrators.

Amid a row over the formation of its new committee maintaining a specific age limit, BNP on Sunday announced that the council of JCD will be held on 15 July.

JCD’s last committee was formed on 14 October, 2014 with Rajib Ahsan as its president and Akramul Hasan as general secretary. The committee was dissolved on 3 June last.