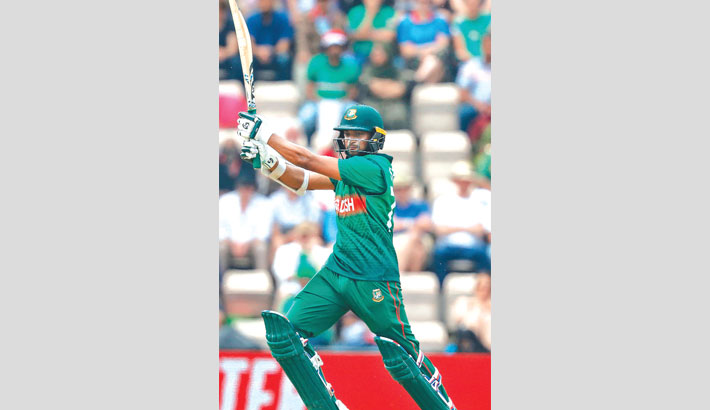 Shakib Al Hasan yet again reached another milestone, making it a memorable World Cup for him.

The ace all-rounder became the first Bangladeshi batsman to score 1000 runs in the World Cup during the match against Afghanistan at Rose Bowl in Southampton on Monday.

Starting the match with 965 runs and 35 runs shy of achieving the feat, Shakib flicked pace bowler Dawlat Zadran for a single through deep square region to reach the required runs.

By doing so, he reached the 1000-run milestone in just 27 World Cup matches. He is the 19th batsmen to complete 1000 runs, a list which is led by Indian legend Scahin Tendulkar with whopping 2278 runs in 45 matches under his belt.

The kind of form Shakib is going through, it is highly likely that he could end up in the top ten highest run getter of World Cup.

In the last five matches that he played in this World Cup, Shakib Al Hasan made some kind of record or other. The match against Afghanistan was also no exception as Shakib made it memorable with yet another feat.

He however survived through with a wise review when on 26 runs as umpire responded positively at Rashid Khan’s leg-before appeal. But the ball tracker showed the ball went over the stumps.

Shakib and Chris Gayle now are the only two active cricketers with 1000 World Cup runs.

ICC World Cup so far has been the tournament of milestones for Shakib. Here he played his 200th ODI, he became the second Bangladeshi player to amass 6000 ODI runs, he became the quickest player to join the four-member ODI double club of ‘6000 runs and 250+ wickets that also includes Sanath Jayasuriya, Shahid Afridi and Jacques Kallis.

He also has four-match fifty-plus streak at the start of World Cup campaign, only four other players can boast of the feat namely Navjot Sing Sidhu, Sachin Tendulkar, Graem Smith and Steve Smith.

Smith has however five straight fifty plus knock (2015) and Shakib could emulate it had he scored 50 plus knock against Australia. But he was dismissed on 41 runs, thus Smith’s record was saved.