Coca-Cola extends as Olympic sponsor in China deal to 2032 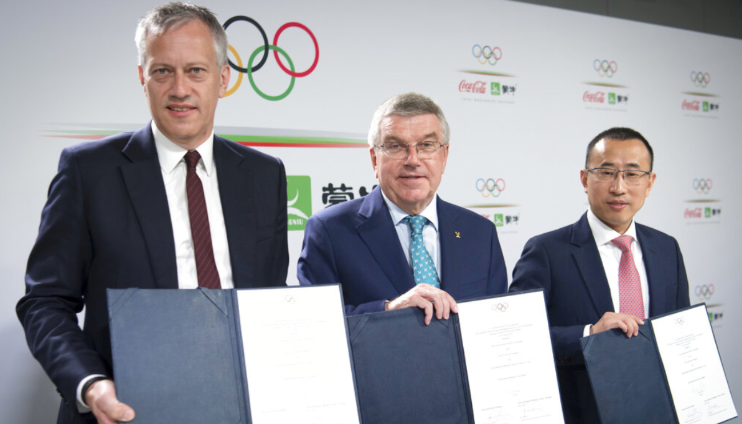 Taking Coca-Cola's sponsorship beyond 100 years, the IOC has extended with Coca-Cola from 2021 through 2032 in a first-ever joint commercial deal with Chinese dairy company Mengniu.

Coca-Cola's partnership with the IOC began at the 1928 Summer Games and will now stretch to 104 years.

While the Atlanta-based drinks giant is an Olympic fixture, the deal helps 20-year-old Mengniu's ambition to turn its milk and yogurt drinks business into a global brand.

The value of the deal was not disclosed at a signing ceremony Monday. The Financial Times citing anonymous sources reported it could be worth $3 billion with up to half in cash sponsorship.

"The agreement includes unprecedented investment in traditional and digital media to promote the Olympic values globally," the IOC said in a statement.

Chief executives of both companies — James Quincey of Coca-Cola and Mengniu's Jeffrey Lu — joined IOC President Thomas Bach to sign the agreement ahead of a day-long meeting to pick the 2026 Winter Games host. Milan-Cortina from Italy is the long-time favorite against Stockholm-Are from Sweden.

Beijing is the 2022 Winter Games host, and China's internet giant Alibaba is already one of the 13 top-tier Olympic sponsors.

Mengniu and Coca-Cola had separate sponsorship deals with FIFA for the 2018 World Cup in Russia.

Coca-Cola is signed with FIFA through 2030, while Mengniu has not yet renewed its one-tournament deal.

China would be a strong contender to host the 2030 World Cup when FIFA clarifies a potential rule to permit bidders from Asia so soon after the 2022 World Cup in Qatar.