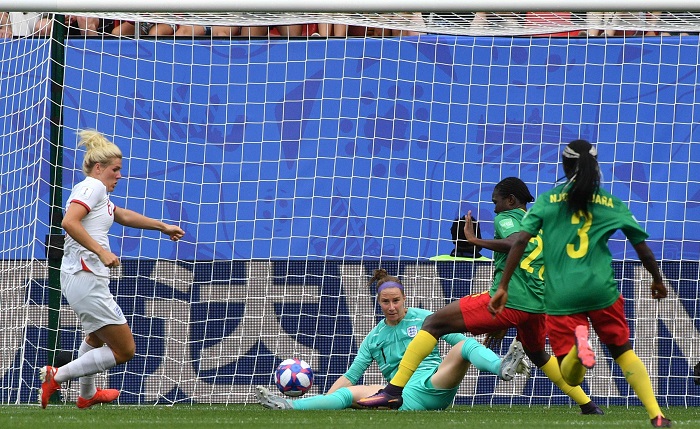 As the Cameroon players protested and play was delayed, England's staff and players watched in disbelief.

"I didn't know what was going on," England coach Phil Neville said. "Are they going to walk off?"

Twice, the English couldn't be sure if Sunday's Women's World Cup last-16 game would resume as the opposition lost its cool in the humidity of northern France and complained about decisions that went against them.

Anger erupted when video reviews on offside decisions allowed Ellen White to send England to a 2-0 lead before halftime and then denied Cameroon the goal that would have brought them within one after the break.

"It's never happened to me before in a game of football," England forward Fran Kirby said. "We had to keep our heads and stay in the game."

England won 3-0 to set up a quarterfinal meeting with Norway on Thursday but Neville was subdued afterward because of the Cameroonian conduct. He also claimed there were "people fighting in the VIP area and in our hotel" which England shared with Cameroon.

"I sat through 90 minutes and felt ashamed," Neville said. "Under circumstances I've never seen on a football field before, I was completely and utterly ashamed of the behavior of the opposition.

An unusual opening goal set the tone for a game of remarkable moments at Stade du Hainaut.

When White crossed from the left flank to Toni Duggan, Augustine Ejangue intercepted and passed back to her goalkeeper, Annette Ngo Ndom.

Ejangue was caught on camera spitting toward Duggan but she faced no repercussions, even with VAR available to review the incident which could have resulted in a red card.

"It's pretty clear, so unacceptable," Neville said. "That's the worst thing you can do on a pitch."

So Cameroon still had all 11 players to pack onto the goal line. It wasn't enough.

Duggan teed up Steph Houghton on the six-meter box for the shot that Ngo Ndom touched but Ejangue couldn't block on the far post.

"The first goal let us settle," Houghton said. "Then the goal by Ellen really settled us."

When it was eventually awarded.

During first-half stoppage time, right back Lucy Bronze cut into a central position and slipped the ball through to White, who put the ball in the net.

The flag went up for offside, but the celebrations were only delayed. White was given her fourth goal in three matches at this tournament.

When stadium big screens showed the offside decision, Cameroon players were pointing up, apparently bemused by the call to allow the goal.

As Cameroon's players remained in a huddle protesting, the referee delayed the restart. The game eventually resumed, briefly, before halftime. As the England players headed down the tunnel, their opponents remained on the field to complain to the officials and then to huddle together.

"When you are in a state of shock, occasionally you can lose your cool," Cameroon coach Alain Djeumfa said. "There was just a miscarriage of justice."

"We were really disappointed," Cameroon midfielder Raissa Feudjio said. "The coach said: 'Don't worry, the referee wants England to win today.' Don't worry about this. Your job is to represent your country. So you have to go back out and play. Some of us really wanted to stop playing completely but we finished the game."

Only after a lot more anger in the second half.

Cameroon thought it had scored within four minutes of the start of the second half when Ajara Nchout put the ball in the net. Again, celebrations began before she was stopped in her tracks for a VAR review.

Gabrielle Onguene was determined to be offside when Nchout received the ball. Denied a goal, Nchout held her head in her hands and cried.

The player had to be comforted by Djeumfa. Again, the Cameroonians looked like they didn't want to resume playing.

"It takes you back to the times when you were a kid," Neville said, "when you lost and you went home crying with your ball."

Any lingering prospect of a Cameroon comeback was dashed by England's third goal in the 58th minute.

Dugan sent a low corner kick to the onrushing Alex Greenwood, who was left unmarked to sweep the ball into the net.

An uncontested moment on an evening of drama.