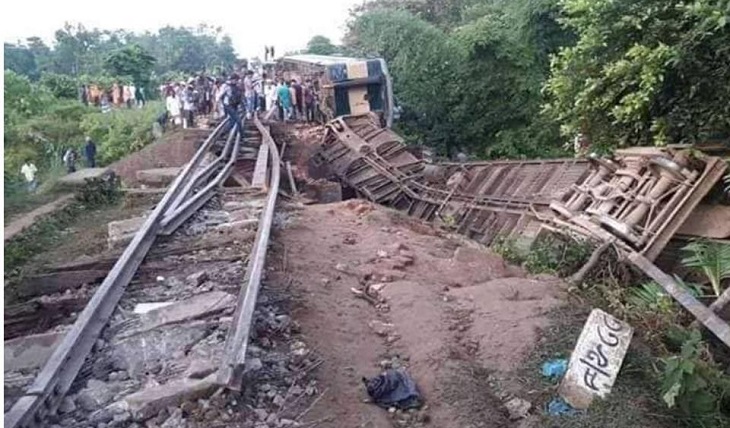 A four-member committee has been formed to investigate the train derailment in Kulaura of Moulvibazar that left five passengers dead and more than 200 others injured last night.

The railway authorities have asked the committee to submit its report in the next three working days,

The accident took place when six coaches of Dhaka-bound ‘Upaban Express’ from Sylhet veered off the tracks around 11:40pm after a culvert over the Barochhara Canal, 200 yards off Baramchal Railway Station, broke down, said Yardous Hasan, officer-in-charge of Kulaura Police Station.

Two of the coaches fell into the canal and one of them overturned, he said.

Five bodies were recovered from the canal, said Nurun Nabi, an officer of Fenchuganj fire service who was on the spot. Identities of the deceased could not be known immediately.

He said a number of ambulances from government and non-government hospitals of the region carried the injured passengers to hospitals with the help of the district administration and police.

Kulaura Rail Station local in-charge Dulal Chandra Das said the train was overloaded with passengers as the bus services on Dhaka-Sylhet Highway remained halted as a bailey bridge at Shahabajpur in Sarail of Brahmanbaria district collapsed.