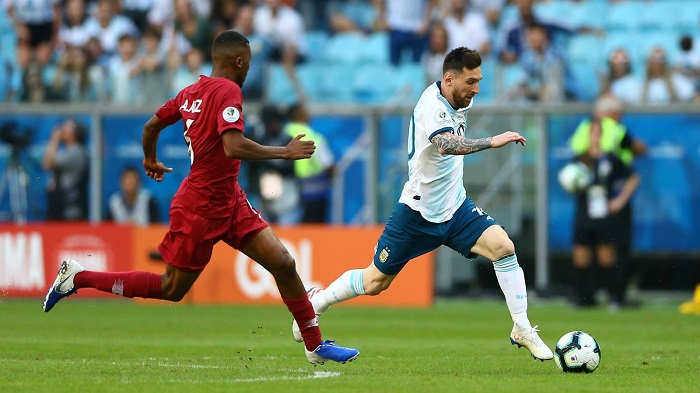 An early goal by Lautaro Martinez and Sergio Aguero's late second gave Argentina a 2-0 win over Qatar on Sunday that qualified them for the Copa America quarter-finals.

Both strikers found the net on Sunday to kill off determined Qatar in a match that still left much to be desired for fans of the Albiceleste.

This win was what Argentina needed to keep their Copa America hopes alive.

A stuttering 2-0 victory over Qatar avoided the humiliation of a first-round exit in Brazil, extending the Albiceleste's interests in the competition for at least four more days.

Whether their tournament will go on any further from this point will depend on the team showing a marked improvement from the quarter-final onwards, a condition that right now looks far from being fulfilled.

The equation was simple for Lionel Scaloni's troops going into their Group B decider. Win, and carry on in the Copa. Lose, and they were free to pack their bags and head back to what would doubtlessly have been an indifferent reception in Buenos Aires.

Thanks to the goalscoring instinct of Lautaro Martinez, they enjoyed a perfect start. The Inter man, paired with Sergio Aguero in a front two that owed much to Argentina's need for prowess in front of the net, had already gone close once when he showed lightning reflexes four minutes in to steal a Qatar goal kick and with his second touch drill the ball past Saad Al Sheeb.

It was the first goal from open play Argentina had managed in the entire tournament. Lautaro's shot had provoked the penalty which allowed Lionel Messi to equalise in the previous outing against Paraguay and he looked dangerous again on Sunday, moving across the forward line and posing constant questions of the Asian Cup holders while connecting sporadically with Messi.

While Martinez tried gamely to keep his team moving forward, and Rodrigo De Paul promised on occasion with a handful of useful interventions, there was precious little support elsewhere on the pitch. There was at least promise in his partnership with Aguero, who scored his own right at the death to seal qualification after a frustrating afternoon of missed chances.

Messi again looked a shadow of the wizard we are so used to watching on a weekly basis for Barcelona, without even a single shot on target to his name until a tame effort 81 minutes in. And the less one says about the Albiceleste defence, which oscillated from absent-minded to downright negligent to keep Argentina on the brink of catastrophe throughout, the better.

Perhaps two moments from Sunday's agonising victory sum up this Argentina first-round campaign to perfection. The first came right before half time, with Qatar threatening from a close-range free-kick. Giovani Lo Celso and Leandro Paredes contrived to jump in opposite directions in the wall, letting the ball squeeze through and strike Franco Armani's right-hand post.

Then, 70 minutes in, Messi received the ball in blissful solitude inside the area from substitute Marcos Acuna with the entire Qatar side calling for play to be halted for what seemed a blatant foul from Aguero. It was the kind of chance the captain eats for breakfast, but on this occasion, he blasted high, wide and not so pretty to let the opposing team off the hook.

In terms of disorganisation, low morale and a general sense that this team does not know exactly what it is supposed to be doing, those snapshots laid bare at least part of the reason why results have been so disappointing in Brazil and indeed for some time before.

At the very least, Argentina and Messi now have the chance to turn the page and look forward. Not only did they qualify for the quarters, but Paraguay's defeat to Colombia also allowed the Albiceleste to grab second place in Group B, setting up a clash with Venezuela and avoiding fearsome Brazil.

That should come as little relief, however. On current form, the Vinotinto must be considered equals for Thursday's match, if not outright favourites, having shown far more resilience and team spirit in the first round than their more illustrious upcoming opponents.

Sunday offered the first clues that a team could be emerging from the chaos and malaise of the last year. But they will need to be much better across the field to have a chance of triumphing in the last eight and continuing this Wacky Races adventure that has been the Copa America.