7 dead, over 200 passengers hurt as ‘Upaban Express’ veered off 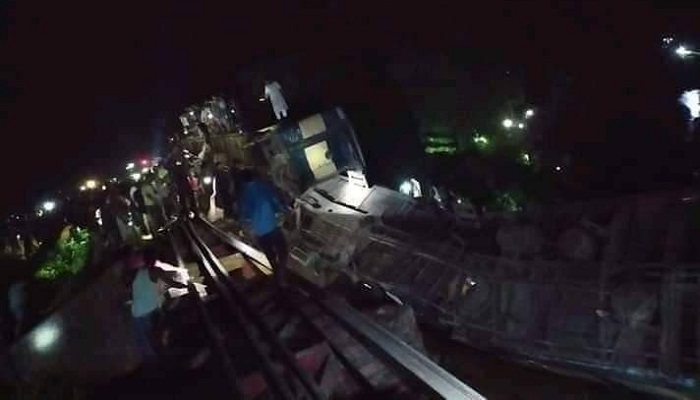 At least seven people were killed and about 250 passengers injured as Dhaka bound ‘Upaban Express’ veered off the rail track on Sunday night.

Two bogies of the intercity train fell into the canal after derailment and a bogy was overturned at around 11:45pm on Sunday night.

The accident took place on a bridge near Kalamia Bazar, 200 meter away from Baramchal railway station in Kulaura upazila in Moulvibazar district.

A passenger of the ill-fated train Shahed Ahmed, acting principal of Jointapur Imran Ahmad Degree College, said that two coaches of the train derailed and fell into the canal and a compartment turned-turtle.

He further said that several passengers died on the spot and at least 200 passengers of other coaches were injured in a fierce shock.

Two of the deceased could be identified among the seven. They are Monowara Parvin, 48, and Fahmida Yeasmin, 20.

Yardous Hasan, officer-in-charge of Kulaura Police Station, said six bogies of Dhaka-bound ‘Upaban Express’ train from Sylhet veered off the tracks around 11:40pm after a culvert over the Barochhara Canal, 200 yards off Baramchal Railway Station, broke down.

Two of the bogies fell into the canal and one of them overturned, he said.

Sub-inspector Harunur Rashid, duty office at the police station, said around 1:45am on Monday that they recovered four bodies from the spot.

He said a number of ambulances from government and non-government hospitals of the region carried the injured passengers to hospitals with the help of the district administration and police.

Kulaura Rail Station local in-charge Dulal Chandra Das said the train was overloaded with passengers as the bus services on Dhaka-Sylhet Highway remained halted as a bailey bridge at Shahabajpur in Sarail of Brahmanbaria district collapsed.