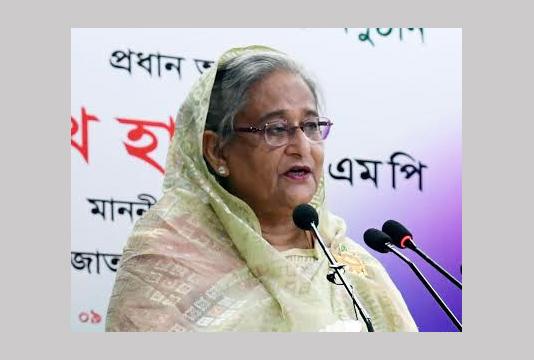 Prime Minister Sheikh Hasina on Sunday asked the fresh civil service (BCS) administration cadre officials to begin their career with a vow to serve the country with patriotism, dutifulness and innovative ideas as public servants.

“Don’t take your service merely as a job, work for the country as well as the people with dutifulness and patriotism,” she said while addressing a large group of young officers of the cadre at BCS Administration Academy in city's Shahbagh area.

The premier simultaneously asked them to be innovative, confident and equip them with time-befitting knowledge to reach the outcome of the development to people’s doorsteps.

She said the officers were “very fortunate” as they were selected through a competitive process and their job created for them scopes to serve the people.

The function marked the conclusion of the academy’s 110th, 111th and 112th Law and Administration Courses.

Sheikh Hasina said since the world was changing constantly, the officers must to cope up with the changes and familiarize them with new technologies while they must always keep in mind they were servants of the people.

“Our constitution describes officers as servants of the people. So, serve the people as their servants and for their welfare as well as development of the country being imbued with patriotism,” she said.

The premier said she personally believe that through the trainings the new officers received by now made them realize what were their duties and responsibilities.

She said the government planned to expand the time span of the officers initial training period for their enhanced efficiency to materialiase Bangladesh’s “Vision 2041” to turn it as a prosperous and developed country as dreamt by Father of the Nation Bangabandhu Sheikh Mujibur Rahman.

Earlier, Sheikh Hasina handed over the awards and certificates among the participants and later witnessed a colorful cultural programme.

Sheikh Hasina, also Minister of the Public Administration Ministry, has directed the new officers of the administration to work with self confidence, saying, “Work with the mentality of serving the people by innovating newer strategies and system to render better services.”

About promotion and other benefits to civil servants, the prime minister said, “It is a routine work and we have paved the way for giving promotion with resolving 58 cases that halted process for long. It is a must to have job satisfaction”.

We are trying our best to give every possible advantage to the civil servants including providing loan with one percent interest to purchase (personal) car,” she mentioned. For developing an efficient administration, the premier said, the government has given special priority to training as there is no alternative to it for building skilled human resources.

The premier hoped that the new officers will take the responsibility of the country to build it as a developed and prosperous one by 2041.

She asked the fresh officers to know the true history of the country as few generations have deprived of knowing it after 1975 which she termed as the most shocking for a nation. The premier urged the officers to be alert against militancy, terrorism, corruption and drugs so that they couldn’t be able to destroy the country.

Regarding birth of the Awami League, Sheikh Hasina, also President of the party, said, “The People get something whenever the Awami League comes to power. It has given everything to the people including the independence of Bangladesh and the freedom of speaking in Bangla.”

The sun of freedom which once set with the defeat of the last swadhin (independent) nawab, Siraj Ud-Daula on June 23 in 1757 at a mango orchard in Palashi, she said, adding that sun again rises at another mango orchard in Meherpur by forming Mujibnagar government with making the Father of the Nation as its First President on April 17 in 1971.

“Nowadays, all the people of Pakistan including economists are saying the same thing,” she said.

Quoting the ADB report which describes Bangladesh as the fastest growing economy among the 45 countries in the Asia-Pacific, the premier said the country is forecasted to achieve 8.13 percent growth in the GDP while the per capita income has reached at $ 1909.

Spellng out various pragmatic steps taken by her government, the premier said, “Bangladesh will be the most developed and prosperous country in the South Asia by 2041.”

The premier expressed her desire to bring down the country’s poverty rate to a level less than what the USA has.