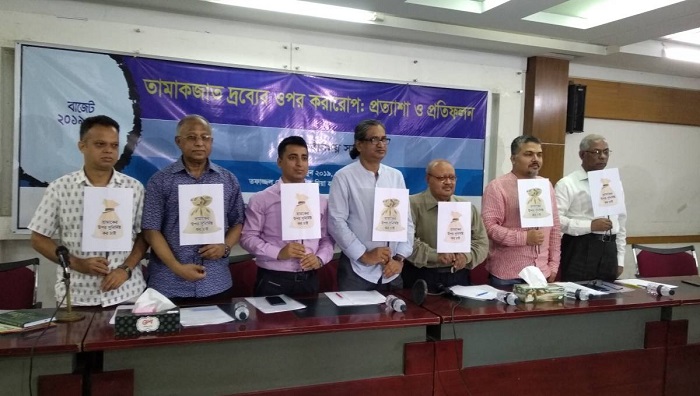 Leaders of different anti-tobacco organisations on Sunday urged the government to impose specific tax on tobacco products and withdraw all the facilities given to tobacco companies in the national budget considering public health.

They came up with the call at a views-exchange meeting at the Jatiya Press Club in the city organised by Bangladesh Tamak Birodhi Jote (BTBJ), Bangladesh Cancer Society (BCS) and Bangladesh Network for Tobacco Tax Policy (BNTTP).

SM Abdullah, an assistant professor at the Economics Department of Dhaka University, read out the keynote paper at the programme.

“Scrutinising the proposed national budge, it was found that the imposed tax on tobacco products would benefit tobacco companies in various ways. And the companies will further be encouraged to continue their business here. The young generation won’t give up tobacco use for this,” he said.

He also said Prime Minister Sheikh Hasina announced to build tobacco-free Bangladesh by 2040. “So, we demand specific tax on tobacco goods and implementation of the Prime Minister’s commitment immediately. “

“There is no alternative to increasing its prices to curb tobacco use in the country,” he also said.

He said, “The government earned Tk 22,000 crore from tobacco sector but its expense in the health sector is Tk 30,000 crore. We’re losing more than our profit. Even we’re losing the active young generation because of tobacco use.”

“If we want to build tobacco-free Bangladesh by 2040 then we’ve to reduce 18 lakh smokers every year in the country. So tax on tobacco products must be increased,” he said.

BTBJ coordinator Saifuddin Ahmed said, “We had expected many things in the national budget before its announcement but our expectations were not fulfilled.”

“Even some of them are expecting to construct cancer hospital here. How funny! They’re causing cancer in the country supplying dangerous items and now they want to build cancer hospital!”