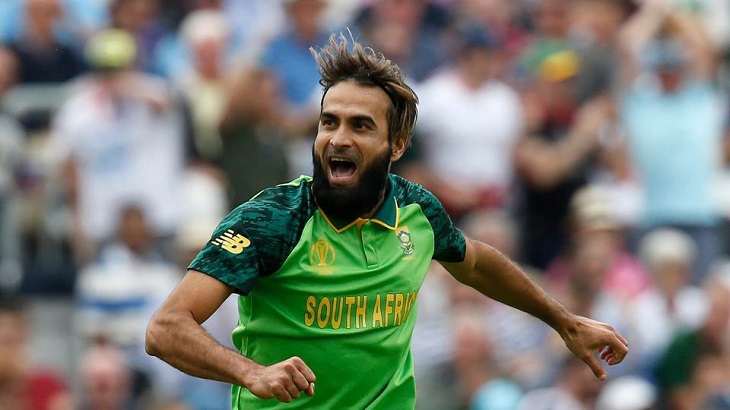 The two wickets gave him 39, one more than fast bowler Allan Donald, who retired after the 2003 World Cup.

Tahir, the oldest man in the tournament at 40, induced Fakhar Zaman to lob a catch to first slip in the 15th over, and brilliantly caught Imam-ul-Haq off his own bowling in the 21st. Pakistan was reduced to 98-2.

Tahir, as always, celebrated by running around the Lord's ground with arms out like he was flying.

He has 10 wickets in this tournament.

India captain Virat Kohli has been fined 25% of his match fee for excessive appealing for an lbw decision in the win against Afghanistan at Southampton on Saturday.

Kohli admitted to breaching the code of conduct and accepted the sanction proposed by match referee Chris Broad.

During the 29th over, Kohli advanced toward umpire Aleem Dar in a manner Broad considered aggressive. India was under pressure, and Kohli was animated by Jasprit Bumrah's strike of Rahmat Shah's pads. India had lost its review. Bumrah eventually dismissed Shah in the same over, and Hashmatullah Shahidi, to turn the tide.

Kohli received one demerit point, the second of his career since the code was revised in September 2016. The other was issued in January 2018 during a test against South Africa in Pretoria.

Pakistan won the toss and chose to bat first against South Africa at Lord's.

Pakistan made two changes from its defeat to India last weekend, bringing in batsman Haris Sohail and bowler Shaheen Afridi for Shoaib Malik and Hasan Ali.

South Africa was unchanged after its narrow loss to New Zealand on Wednesday.

Captain Faf du Plessis said he would have chosen to bowl, anyway.

Pakistan needs a win more than South Africa from their Cricket World Cup group match at Lord's on Sunday.

Both teams have won only once, but Pakistan has a match in hand and a slightly better outside chance of making the semifinals.

South Africa's chances are remote, and gone if it loses.

Pakistan is coming off a thumping from India a week ago. South Africa lost in the last over to New Zealand on Wednesday.

South Africa has a 3-1 win-loss record against Pakistan in World Cup history.

Spinner Imran Tahir needs two more wickets to surpass Allan Donald as South Africa's leading wicket-taker in World Cups. Donald has 38. Tahir is the only bowler here not to have been hit for six. He's delivered 282 balls.

Fast bowler Mohammad Amir has 13 wickets for Pakistan at this World Cup, at an average of just 13.

The forecast is for cloudy but warm conditions.