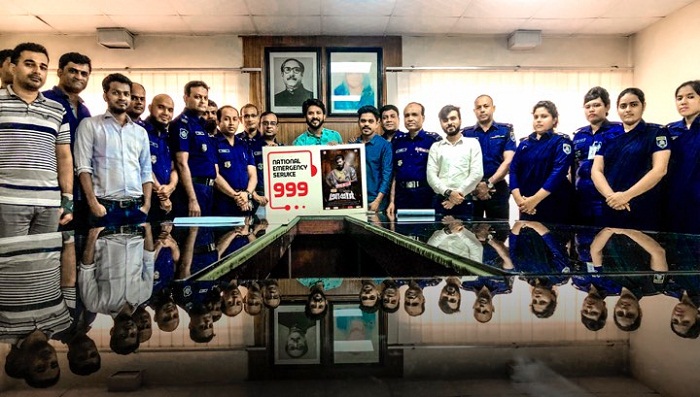 The new film ‘Abbas’ and national emergency service have joined hands in a bid to create social awareness and make popular the 999 service.

In this regard, the film directed by Saif Chandan and the authorities of national emergency service 999 have signed a deal on Monday.

The 999 service is reaching at the root level and it is getting popularity day by day.

The actor of the film Nirob said, “The 999 service is very necessary and urgent for our country. Since many people are being facilitated with it, we should spread the name of the service widely. We will use posters, banners, festoons to make the people of our country aware of this.”

Meanwhile, Mohammad Tabarak Ullah, Superintendent of Police of 999 service said, “This emergency service is providing support of police, fire service and ambulance for the people. Stay with ‘Abbas’, stay with national emergency service 999.”

However, Sohana Saba and Shuchona Azad have performed in this film. Alexander Boh, Don, Ellora Gowhar, Somapti Mastuk, Joy Raj, Nusrat Papia and Shimul Khan will also be seen in the movie.

The film has been produced by Dhaka Films and Entertainment and it will be released on July 5 across the country.