Argentina in good 'psychological' shape ahead of Qatar 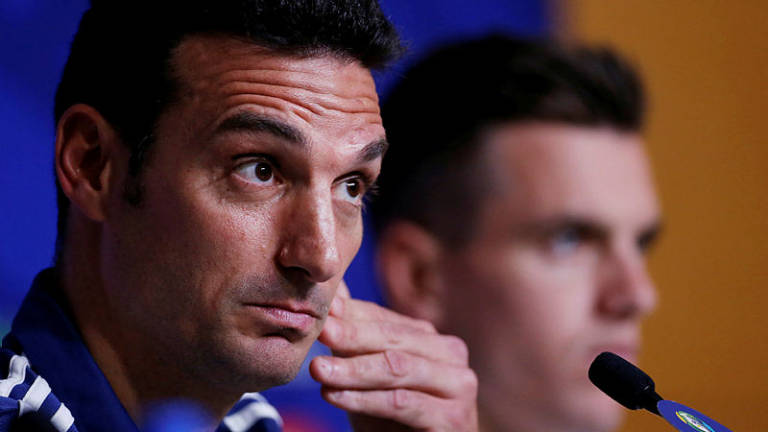 Argentina are in good "psychological" shape ahead of their must-win clash with Qatar at the Copa America, coach Lionel Scaloni said on Saturday.

Following a 2-0 defeat to Colombia and 1-1 draw with Paraguay, Argentina are bottom of Group B with one game left knowing that only a top two finish will guarantee them a place in the quarter-finals.

"From a mental and psychological perspective we're in good shape because we have the possibility of progressing and if we win we're in the next round," said Scaloni.

As well as the top two in each group, two of the three third-placed finishers will make the knock-out stages.

If Paraguay beat Colombia in Salvador, Argentina would not be able to finish in the top two.

But Peru's 5-0 defeat to Brazil on Saturday left them third in Group A with four points and a goal difference of minus three.

Any Argentina victory would leave them above Peru should they finish third in Group B.

Having changed his forward line between the Colombia and Paraguay matches -- dropping Sergio Aguero and Angel Di Maria for Rodrigo de Paul and Matias Suarez in the second game -- Scaloni hinted that he could be considering yet another option.

Five-time Ballon d'Or winner Lionel Messi is a certainty to start but Juventus forward Paulo Dybala could be given the nod alongside him.

"They can play together, they're two top level players and they need to work together, which they haven't done much, but with compromise they could do it," said Scaloni.

Whoever plays, Scaloni says Argentina will need to be "patient" against Qatar, who are coached by Spaniard Felix Sanchez.

"Qatar have a coach who has them playing good football, they change system within the same match," he said.

Like Argentina, Asian champions Qatar are also in need of a win to progress to the quarter-finals.