Birth Control Agenda in the Doldrums 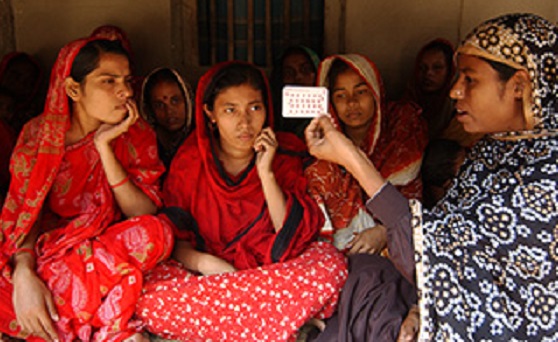 Being one of the most densely-populated countries of the world, despairingly scanty land volume of Bangladesh is increasingly becoming unable to ensure a healthy, hygienic and eco-friendly living for the Bangladeshis. Against the backdrop of this rising trend of population growth, the option of planned family through birth control programmes has to be introduced as an agenda of topmost national priority.

The population of Bangladesh is silently increasing at a rate that may hoist cautionary signal No.1 in the very near future. According to research reports of country’s renowned population experts, the trend of the population growth rate is clearly not slowing down at the moment. Alarmingly, country’s family planning indicators remain stagnant once we review the contraceptive prevalence rate reports of the last four years. The latest demographic and health survey statistics completed in 2017 put the contraceptive use rate at 62 per cent which was the same four years ago.

As per the latest national census held in 2011, the country’s population growth rate or average annual change in the population was 1.37 per cent. This changing phenomenal factor instead of showing downward trend as per expectation statistically remains stagnant or a slight increase in different years in percentage over the years since 2011. With virtually no tangible improvement in the key family planning indicators like total and adolescent fertility rates, contraceptive use and child marriage, Bangladesh still stays in the list of the most populous countries comparing the total population with the total land volume.

Once Bangladesh’s family planning policy and operations earned for her global accolades and were widely considered to be a pragmatically effective demographic change-making tool by others, have considerably lost its efficacy and effectiveness during the last ten years to speak the least. Former professor of Dhaka University Dr. Barkat e Khuda strongly asserts that very infrequent home visits by the family planning officials, half-hearted and despairingly inefficient service, negligibly poor supply of contraceptives as against the ever-increasing need, frustratingly low budgetary allocation and above all non-committed motivational works are the contributory factors pulling back our famed family planning band wagon.

Once we take the total fertility rate (TFR) into cognisance, we will clearly see the zero improvement in the graph of the demographic dynamics. TFR is the average number of children a woman would bear during her lifetime. The TFR in 2014 was 2.3 and, to our utter dismay, it maintained the same even in the latest demographic and health survey conducted in 2017. Bangladesh has the high adolescence rate compared to that in many other countries. In addition, Bangladesh has been placed in the list of world’s top four child marriage prone countries which contributes immensely to population growth since child and adolescent brides are more likely to bear more children.

In the opinion of Prof Md Mainul Islam, chairperson of population science department of Dhaka University fertility rate remains high and it has not decreased since 1914. Government officials, too, uphold his statement saying that births per 1000 women aged 15-19 was 108 in 2017. In an UN study, it has been found that 59 per cent marriages that took place in Bangladesh between 2006 and 2017 involved the brides below the age of 18. Although female enrolment rate in education is increasing, the rate of dropouts still remains high which eventually results in early marriages and teenage pregnancies.

Child marriage and early pregnancies are not isolated from each other so far as the issue of birth control is concerned. In fact, child marriage and teenage pregnancies are directly interlinked with family planning campaign and, therefore, need an integrated approach to combat with. Experts working on family planning issue in different NGOs have strongly emphasised that to get the best fruits out of the family planning programme, both group and one-to-one motivational works have to be put on topmost gear. These NGO experts allege that disconcerted and uncoordinated motivational schedule of the government officials can hardly reach out to the millions of potential clients. Home visit by the family planning officials and field workers has now become an occasional phenomenon. Home visit which once used to be done once in every two months is now done once in every six months.

The use of long-acting reversible and effective contraceptives is declining as per the records of the experts. These contraceptives which are meant to provide safe and secure contraception coverage for an extended period of time can no longer attract new users because of languishing campaigning in favour of these long-term methods. Now only eight per cent people use it instead of required 20 per cent. The survey on home visit and contraceptive use were conducted on 20,250 households and which is why the survey shows almost an authentic picture of the overall family planning operations now being carried out across the country.

In a report released by the Directorate General of Family Planning, the government has set up 70 adolescent-friendly health centres called Maa O Shishu Community Shastho Kendro in districts and upazilas and 350 such reproductive health facility centres are providing service at the union levels which are extremely inadequate to meet the burgeoning needs of the whole country. High official of the Family Planning Directorate often complain of the poor manpower of the Directorate and low budget allocation.

Unquestionably, Family Planning Programme serves the lifeline to birth control in the context of over-populated demographic reality of Bangladesh. We have not the slightest scope left to budge an inch from the hard line in our approach towards population control. Any softening or relaxed stance will eventually result in catastrophic population explosion, the social and economic backlash of which will be too hard for us to bear.

For keeping population of the country within a tolerable limit, Family Planning Programme has to be given topmost national priority. Possible highest budgetary allocation has to be ensured for this most vital sector. Manpower of this department has to be redoubled immediately for going into full-scale operations across the country. Again, vulnerable reproductive groups like child and adolescent or the teenage girls and boys must be brought under comprehensive motivational courses so that they can become more conscious about reproductive health and the demerits and disadvantages of early pregnancies.

Motivational courses must include adequate knowledge about contraceptive use. Most importantly, home visit which has been proved to be time-tested effective mechanism in reaching out to every door has to be reactivated with full efforts. Finally, each and every employee of the Family Planning Department will be made to work within a strict code of accountability. We have to remember that any lapse or negligence will eventually turn on us as a self-annihilating process.