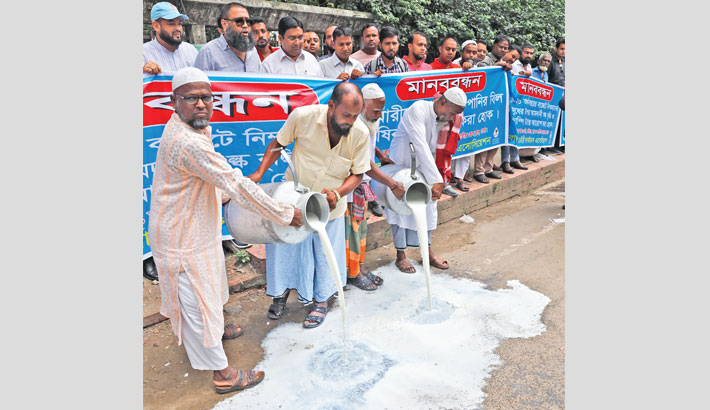 A Novel Way of Protest - Dairy farmers pour huge quantity of milk on a road in front of the National Press Club in the capital on Saturday protesting drastic price fall of the item. Bangladesh Dairy Farmers’ Association (BDFA) arranged the demonstration. —Kamrul Islam Ratan

Hundreds of owners and employees of dairy farms formed a human chain in front of Jatiya Press Club on Saturday to press home their 11-point demand, including one for necessary step to secure price of locally produced milk and save the farmers from loss.

Later, they held a press conference at the Jatiya Press Club and read out written statement highlighting their demands.

Speaking on the occasion, BDFA president Imran Hossain said dairy farmers will not benefit from nominal hike in concessionary customs duty as appeared in the proposed budget for FY 2019-20.

“Concessionary customs duty which has been hiked from 5 to 10 percent which is not enough to protect the loss incurring dairy farms,” he said.