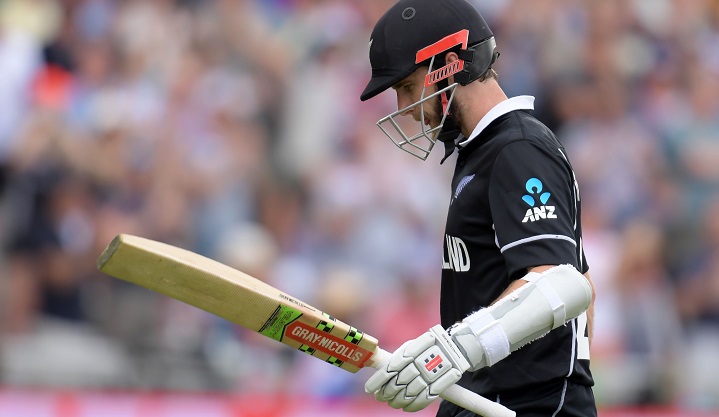 New Zealand were 7-2 five balls into the first over of the match, from Sheldon Cottrell, with opening batsmen Martin Guptill and Colin Munro both falling for golden ducks in front of a packed crowd at Old Trafford.

But Williamson and Ross Taylor (69) repaired the damage with a third-wicket stand of 160.

Taylor gave his innings away on 69 when he couldn't clear Jason Holder at mid-off after chipping a catch off Chris Gayle.

Gayle mockingly suggesting he had injured his arm in taking the wicket, with New Zealand now 167-3 in the 31st over.

But Williamson, fresh from his match-winning 106 not out against South Africa at Edgbaston on Wednesday, carried on in typically calm and elegant fashion.

He went to three figures with his eighth four in 124 balls when he pulled a loose delivery from Kemar Roach.

It was Williamson's third consecutive score of 50 or more at this World Cup -- a sequence that started with his 79 not out against Afghanistan.

Williamson's 13th one-day international hundred was also his fourth in 14th innings at this level in England and Wales.

Left-arm quick Cottrell was on target first ball with a delivery that thudded into the pads of Martin Guptill.

Umpire Ruchira Palliyaguruge initially said "not out" but the West Indies successfully reviewed the decision, with replays showing the ball had pitched in line and would have hit leg stump.

Guptill, who made a World Cup record 237 not out when New Zealand beat the West Indies in a quarter-final four years ago, had to go for nought.

Misfielding by Carlos Brathwaite allowed new batsman Williamson to get off the mark with an all-run four.

Williamson then cover-drove Cottrell for three off the fourth ball of the over to leave Colin Munro, his side's other opener, on strike.

Munro too fell first ball, beaten completely by another yorker that smashed into his stumps.

For the second time in the over Cottrell, still a serving member of the Jamaica Defence Force, greeted a wicket with his trademark military salute.

It was only the second time both openers in a World Cup match had fallen for first-ball noughts, with Sri Lanka's Lahiru Thirimanne and Tillakaratne Dilshan collecting golden ducks against Afghanistan in 2015.

But they fell to two different bowlers -- Dawlat Zadran and Shapoor Zadran.

Williamson and Taylor, however, repaired the damage in style with New Zealand yet to lose at this World Cup.

The West Indies were seventh in the 10-team round-robin group table before the start of Saturday's matches and struggling to qualify for the semi-finals after losing to Bangladesh last time out.