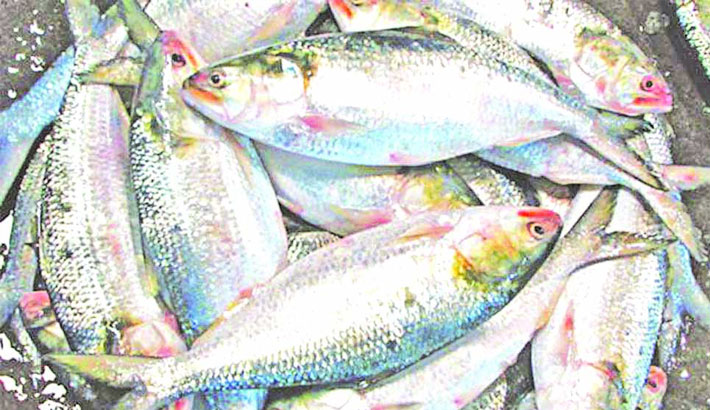 Fishermen are netting hilsa in abundant number from different rivers estuaries in last few days ahead of peak season.

A beam of satisfaction is seen in the faces of thousands of fishermen and they are passing busy time with happy mood as they are pocketing good profit. Water flow of rivers increased due to rains across the country in the last couple of weeks.

Dr M Anisur Rahman, a senior scientific officer at Bangladesh Fisheries Research Institute (BFRI), told the daily sun that September and October are peak time for hilsa netting. “But, we have witnessed netting of hilsa in abundance in the month of August.”  “This year, fishermen are netting plenty of hilsa ahead of peak netting season,” he said.

In the last couple of years, fishing ban on mother and juvenile hilsa sustained marine fish successfully. “This has resulted in good catch of hilsa this year,” he said.

“Hilsa usually migrate when they witness rainfall and water flow on rivers,” he said.

“Fishermen of Chandpur, Barishal, Bhola, Lakshmipur, Borguna and other coastal areas are pocketing good profits as a good number of hilsa are being netted in abundant number in river estuaries,” he added.

The scientist observed that the government took initiatives to ban netting of hilsa fries in FY 2004-2005 in a bid to boost production of marine fish.

On May 19, the government imposed a 65-day ban (from May 20 to July 23) on fishing in the Bay of Bengal, aiming to boost commercial fishing in the country.

Netting all types of saltwater fish has been prohibited during the ban period. This also prompted hilsa migrating to river estuaries.

In the last few years, fishing ban on mother and juvenile hilsa ended successfully resulting in netting of hilsa in abundance this year.

Since 2015, the government imposed a periodic ban on fishing in the sea for creating a safe environment for aquatic or semi-aquatic mammals in Bangladesh’s exclusive economic zone in the Bay of Bengal and for ensuring safe and sustainable accumulation of fish reserves.

Hilsa production has increased by more than two-and-a-half-fold in the last 15 years due to various efforts of the government, including imposing ban on catching brood hilsa and jatka (hilsa fry), according to the Ministry of Fisheries and Livestock.