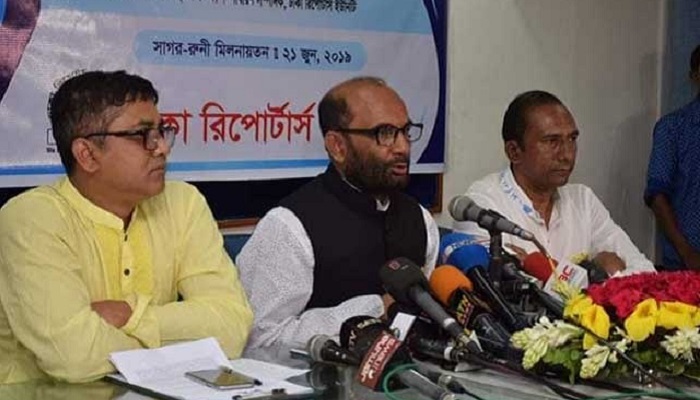 Housing and Public Works Minister SM Rezaul Karim has pledged to demolish all buildings in the capital constructed violating building codes. But he sought time to meet this commitment.

SM Rezaul Karim made this pledge while speaking a ‘meet the reporters’ programme at Dhaka Reporters’ Unity (DRU) in the capital.

He said in new Dhaka, many buildings are being constructed without following building codes.

“We will demolish those buildings which have been constructed violating the rules,” said Rezaul Karim.

He warned that no risky buildings will be spared.  “Homeowners who built unplanned buildings, however influential they may be, will not be let off the hook.”

The minister informed that the government has started identifying the buildings constructed illegally in Dhaka,

“We don’t want to keep a single house beyond law. But we cannot do it overnight,” said Rezaul Karim.

The minister said there are 500-year old buildings in old Dhaka. “If we want to demolish the buildings overnight, it will not be possible,” he added.

Rezaul said the citizens should be conscious so that they properly follow the construction rules to avoid any disastrous incident in future.

After the FR Tower fire at Banani, 62 officials were found negligent, the minister said, citing an investigation.

“I ordered action against them last week,” he said.

As many as 24 teams of Rajuk found irregularities in construction of 1,818 buildings, according to him.

He sought the media’s help to take action against the “powerful owners of these buildings”.