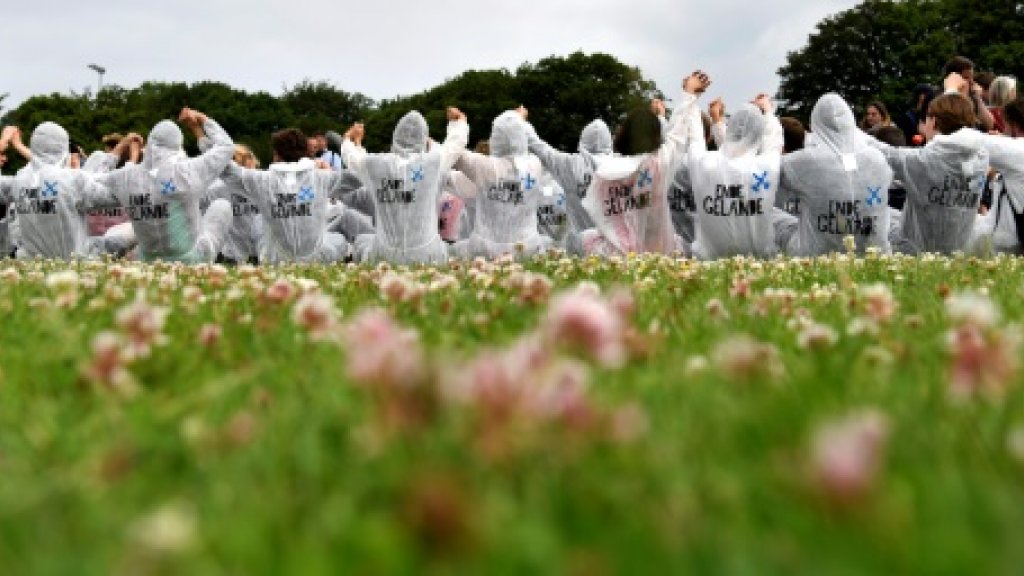 Thousands of European climate activists are readying Friday to blockade a huge German open-cast coal mine and plant in a campaign of non-violent mass civil disobedience.

The target of the so-called "Ende Gelaende" (EG) protest movement is the massive Garzweiler lignite mining operation of energy giant RWE in the Rhine region near Cologne.

The German phrase "Ende Gelaende" signifies that something is irrevocably finished, similar to "end of story" -- which is how the protesters feel about the fossil fuel age.

Under the motto "keep it in the ground", the demonstrators, who will wear white overalls and face masks, have gathered in a nearby tent city for a weekend of activism.

They are supported by the student-strike movement Fridays for Future, which is planning a 20,000-strong rally from 1000 GMT in the nearby city of Aachen, as well as environmental groups such as Greenpeace.

"The climate crisis is already here, we see it every day," said protester Nike Malhaus.

"Our goal is to physically stop, with our bodies, the economic means of production that are responsible for it."

On the eve of the protests, the mood was both festive and tense in the "climate camp" as activists practiced evading police lines, passive resistance techniques and how to act in case of arrest or injury.

RWE warned protesters in online video clips to "not endanger yourselves" inside the 48 square kilometre (18 square mile) mine area and declared it would push for criminal charges on trespass and other offences.

By Thursday some 5,000 people had converged from across Germany and Europe at the colourful camp site, which boasted a vegan food canteen, medical centre, child care and an open-air cinema, near the town of Viersen.

Among the more seasoned protesters -- some of them veterans of the anti-nuclear movement since the 1980s -- were school-aged activists from the "Fridays" movement launched by Swedish teenager Greta Thunberg.

One of them, Doerthe, 19, said that concern about climate change and its victims had led her to stop eating meat, avoid plastic packaging and volunteer in the protest movement.

She said she had "always been a good citizen" but was now ready to demonstrate and "go further" in non-violent demonstrations.

"It's exciting and it's great to see that so many people feel the same way. It comforts me because I know I'm not alone."

Germany, Europe's biggest economy, has promoted clean renewables such as solar and wind and is phasing out nuclear power.

But it is still missing its climate goals because of its huge reliance on cheap coal from enormous open-pit mines.

In the Rhineland region, RWE operates three huge open-cast mines and three power plants that are among Europe's dirtiest.

Merkel's government has pledged to phase out coal by 2038 -- a time horizon the protest movement rejects as far too long as global warming is melting ice caps and glaciers, raising ocean levels and exacerbating extreme weather events.

One of the activists, Guenter Wimmer, 76, said the protest was urgent because "we are close to a tipping point. No-one can say exactly where we are, but we're close."

"Mrs Merkel, a scientist, has been patting young protesters on the head, saying 'it's great what you're doing', while continuing with policies that are depriving them of their future," he said.

Wimmer also said that, as age was sapping his own strength, he was heartened by the passion for change of the youngsters around him.