Gulf crisis: Are we heading for a new tanker war? 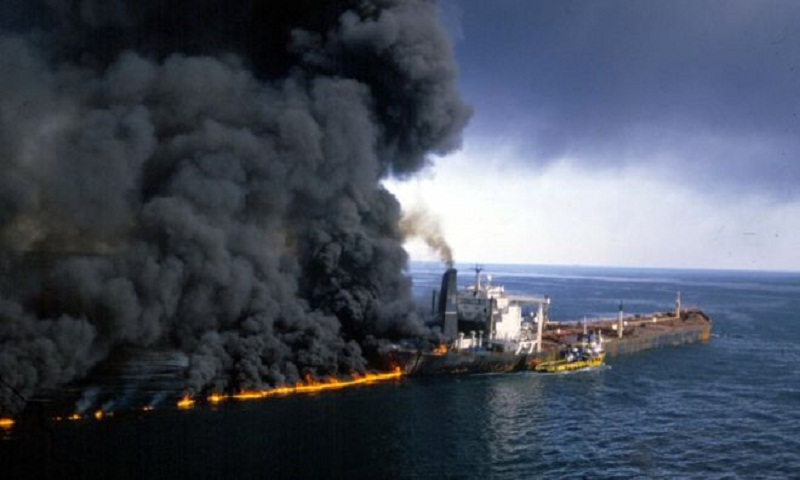 We've been here before: 28 years ago, America and Iran came to blows in the same waters. Ships were attacked, crew members killed and injured.

Before it was over, an Iranian airliner had been shot out of the sky, by mistake.

Could it happen again?

The "tanker war" was a moment of high international tension at the end of revolutionary Iran's eight-year war with Saddam Hussein's Iraq.

The two sides had been attacking each other's oil facilities since the mid-1980s.

Soon neutral ships were being hit too, as the warring nations tried to exert economic pressure on the other side. Kuwaiti tankers carrying Iraqi oil were especially vulnerable.

The US, under Ronald Reagan, was reluctant to get involved. But the situation in the Gulf was becoming increasingly dangerous – a fact underlined when an American warship, the USS Stark, was hit by Exocet missiles fired from an Iraqi jet – though Iraqi officials later claimed this was accidental.

By July 1987, re-registered Kuwaiti tankers, flying the US flag, were being escorted through the Gulf by American warships. In time, it became the biggest naval convoy operation since World War II.

Then, as now, America and Iran were at loggerheads.

Iran's Supreme Leader, Ayatollah Khomeini, had been calling America "The Great Satan" since the Islamic Revolution in 1979.

Washington was still smarting from the humiliation of seeing 52 of its diplomats held hostage in Tehran for 444 days from 1979 – 1981.

So even though Iran and Iraq were both responsible for the crisis, the tanker war was quickly part of the simmering, long-running feud between Iran and America.

It's a feud that has never gone away and which has flared once more in the wake of Donald Trump's decision to apply "maximum pressure" after walking away from the 2015 Iran nuclear deal.

Once again, the waters either side of the Strait of Hormuz have become the arena in which this almost pathological contest plays out.

What, if anything, has changed?

"Both sides have expanded their capabilities," says Dr Martin Navias, author of a book on the tanker war.

Iran, he says, is more capable than ever of using mines, submarines and fast boats to attack and damage commercial and military shipping.

And it's not just a battle at sea: Iran's ability to shoot down a sophisticated American surveillance drone points to another battle, high overhead.

Could the US and Iran start to exchange serious blows?

If attacks on tankers escalate, we could see another US-led reflagging and escort operation.

On 24 July 1987, a re-flagged Kuwaiti tanker hit an Iranian mine on the very first convoy mission. The US deployed more forces and more ships. The two sides were now on a collision course.

In September, American helicopters attacked an Iranian ship after watching it lay mines at night.

In the months that followed, more tankers, and a US frigate, were hit. American forces responded with ever greater firepower, destroying Revolutionary Guard bases and attacking Iranian warships.

Eventually it ended – but not before an American missile cruiser, the USS Vincennes, mistook an Iranian Airbus A300 for an attacking jet and shot it down, killing all 290 passengers and crew on board.

The official report into the incident said that "stress, task fixation (and) an unconscious distortion of data may have played a major role".

The US navy invested heavily in technology and training to avoid such catastrophic mistakes in the future.

But Nick Childs, a naval analyst at the International Institute for Strategic Studies, says today's environment, with rivals also exchanging angry salvoes on social media, makes for a febrile atmosphere.

"The information space has changed," he says. "People get jittery. The danger is that each side is misreading the other."

Donald Trump and Hassan Rouhani both say they don't want a war. Hardliners, on both sides, are a little more ambiguous.

Dr Navias says we're not yet heading for another tanker war.

"We're not seeing an anti-shipping campaign, but a signalling campaign," he says. "The Iranians are signalling to the Americans that they could escalate."

For all the drama of those months in 1987 and 1988, very few tankers were actually sunk and shipping through the strategic Strait of Hormuz was never seriously disrupted.

Now, 30 years on, the US is far less dependent on Middle Eastern oil. Iran has far more to lose, in terms of imports and exports, from a closure of the Strait.

For now, another tanker war seems unlikely. But the fact that neither side really wants an all-out confrontation doesn't mean it won't happen.

"This kind of environment is pregnant with possibilities."