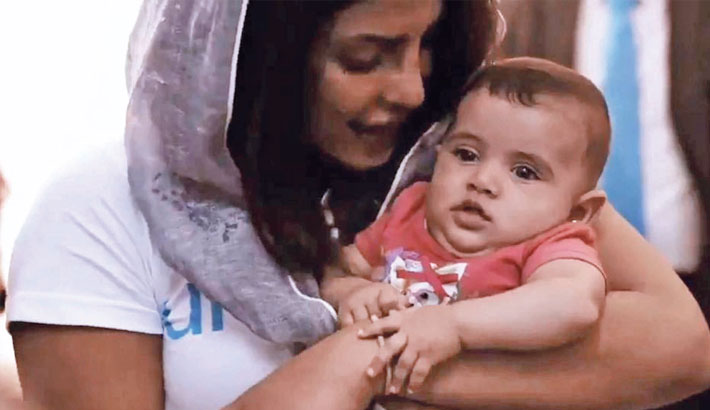 Actor Priyanka Chopra, who is the UNICEF goodwill ambassador, shared a heartfelt message on World Refugee Day which is celebrated on June 20, report agencies.

She took to her Twitter account to share a lengthy message along with a video. The video features Priyanka teaching and playing with children. “On World Refugee Day I am sending all my love to refugee children everywhere,” she said in the video. She continued, “I wish your life full of learning and achieving all your dreams.”Stating that the future of the world lies in the hands of the children, the actor tweeted, “The truth is quite simple...the future of this world lies in the hands of the children of today.”

The actor wrote, “But the harsh reality is that there is an entire generation of innocent children growing up right now without any prospects for their future. These children are affected by displacement due to serious conflict and emergencies in their various regions. When families are forced to leave their homes due to violence, persecution, natural disasters they are torn apart and it’s the children that end up suffering the most.”

“The numbers are staggering, yes... but we have to continue to stand for them, in whatever capacity we can as individuals. They are the future and we need to help. Join me and @unicef by clicking the link in my bio to help keep refugee children safe,” she wrote urging people to stand up for the cause.

A few weeks ago Priyanka toured Ethiopia after her debut at 72nd Cannes Film Festival where she met the President of Ethiopia Sahle-Work Zewde. Priyanka will next be seen in The Sky Is Pink which also marks her Bollywood comeback. It is co-produced by Priyanka, Ronnie Screwvala, Siddharth Roy Kapur and will hit the big screens on October 11, this year.

She last appeared in Hollywood film Isn’t It Romantic, starring Rebel Wilson, Liam Hemsworth, and Adam DeVine. The film released in the United States on February 13 and on Netflix on February 28.