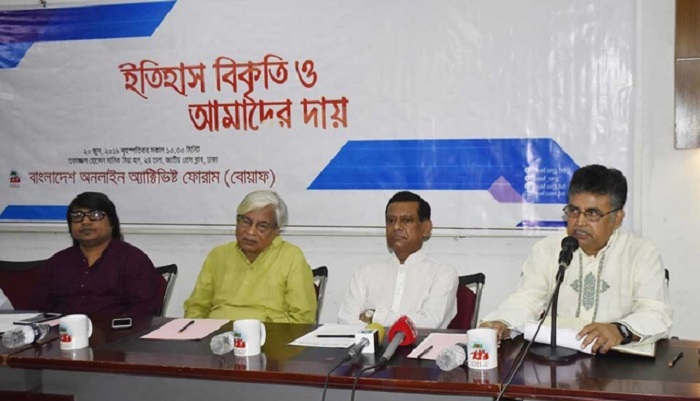 Former Justice AHM Shamsuddin Choudhury Manik thinks that it is possible to take legal action against Prothoma Prokashon for publishing AK Khandaker’s controversial autobiography ‘1971: Bhetore Baire’ (1971: Inside and Outside).

Former Supreme Court (SC) Judge Manik said, “There is every scope of taking legal action against those, who published ‘1971: Inside and Outside’ with ‘wrong information’ about Bangabandhu Sheikh Mujibur Rahman and the Liberation War.”

He came up with the remark at a meeting held at the capital's Jatiya Press Club on Thursday.

Bangladesh Online Activist Forum (BOAF) arranged the meeting titled ‘Distortion of the History and Our Liability.”

During the meeting, Manik demanded a ban on the Prothoma Prokashon.

“I call upon the existing pro-liberation government (Awami League led government) to take legal action immediately against those, who presented wrong information, especially against the publication organisation.” He added.

Earlier, on 26 May, Bir Uttom AK Khandker begged pardon for presenting distorted information in his autobiography in an interview with a private TV channel of the country on May 26. The Daily sun also published this news on its online version.

On June 2, AK Khandaker, with his wife Farida Khandaker, apologised for depicting wrong information in his memoirs in a formal press briefing.

In the briefing, the deputy chief of Staff of the Bangladesh Armed Forces during the Liberation War, Khandaker confessed that Bangabandhu Sheikh Mujibur Rahman did not utter the words “Joy Pakistan” in his historic March 7 speech in 1971.

Recalling the events after the publication of the book, Farida said, “He (Khandaker) and I had thought about the correction the day after publishing the book, but they did not let us do it. They said it would be meaningless to chase a bullet once fired.”

“Then I tried to contact Prothoma Prokashon Publisher Matiur Rahman by phone, but could not. When I finally got him, I asked him ‘how such a big mistake was made?’ He then said ‘I don’t look after these. We have different people to check spellings and grammar. I couldn’t get him since then and hence could not make the correction,” she added in the briefing.

The statement, however, did not shed light on the accusation brought by Khandaker and his wife Farida Khandaker that Prothoma had barred correction of the mistakes after the book “1971: Bhetore Baire” (“1971: Inside and Outside) was published in 2014.

AK Khandaker had written on page 32 of the first edition of the book, “I don’t think that the Liberation War was triggered by this speech by Bangabandhu. The last words of this speech were, ‘Joy Bangla! Joy Pakistan!’”

Khandaker, also a former Minsiter of AL led government, later confessed in the briefing that Bangabandhu Sheikh Mujibur Rahman did not utter the words “Joy Pakistan” in his historic March 7 speech in 1971.