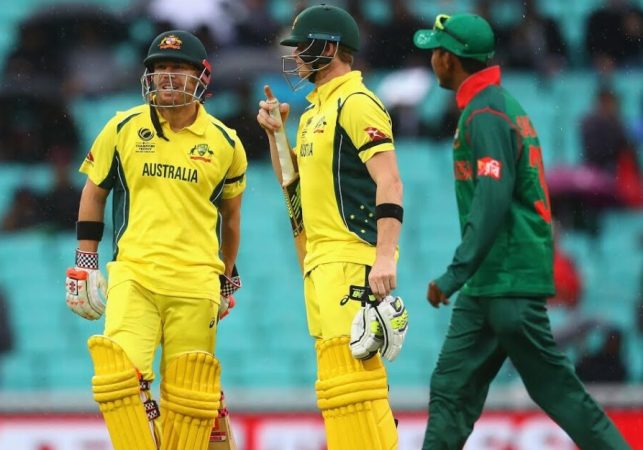 Australia won the toss and elected to bat first against Bangladesh in the 26th match of the ICC World Cup 2019 at Trent Bridge in Nottingham on Thursday.

Australia have eight points in five matches under the belt to keep them in the second position in point table while Bangladesh sit at fifth position with five points in five games.

The manner in which the Tigers gunned down West Indies’s mammoth total of 321-8, keeping 51 balls unused made them upbeat against an Australian side, who lost at the hands of an extraordinary India. Bangladesh’s win against South Africa and West Indies came as absolute brutal fashion as they grounded the opponents like a top team did with minnows. Only the match, they showed hapless performance was against England while they were in winning position against New Zealand. A little bit of luck could have prevented them from losing the match by two wickets to Kiwis. Their other match against Sri Lanka was washed out but Bangladesh was heavily favourite to win that game.

The Tigers may come as underdog in the match but the recent form and ruthless performance hinted the match wouldn’t be a one-sided affair like the past. And if Shakib Al Hasan who has been enjoying a tremendous run of form in batting and bowling, could continue his form, he has the ability to single-handedly win the game.

Shakib so far has accumulated 384 runs in four matches, hitting two centuries and two half-centuries and his lowest score so far in this tournament is 64. In addition he also took five wickets with his wily left-arm spin. Shakib needs only to keep his consistency as Bangladesh has many things to prove against the Aussie.

Here are the XIs: