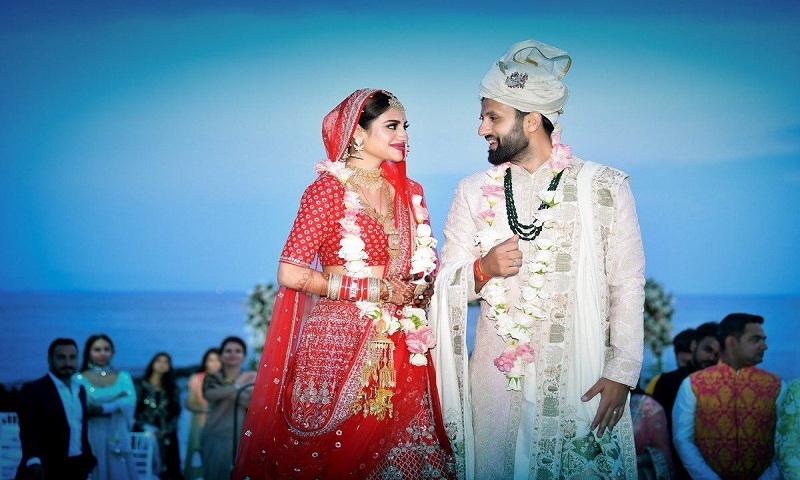 Bengali actress and newly-elected MP Nusrat Jahan got married to her businessman beau Nikhil Jain in the picturesque Turkish town of Bodrum.

The newly-wed couple shared a picture of themselves walking hand-in-hand after they tied the knot on Wednesday.

“Towards a happily ever after with Nikhil Jain,” the Basirhat MP captioned the image on Twitter.

A short video of the wedding was shared on the Instagram page of Photography experts Knotting Bells, which was covering the celebrations.

She looked stunning in a red Sabyasachi Mukherjee designer lehenga while Jain, who is a city-based entrepreneur with a thriving textile business, opted for a whitish outfit.

The 29-year-old actress was working as the face of his textile chain when they got acquainted last year.

Jain is a former student of MP Birla Foundation Higher Secondary School. After studying management at the University of Warwick, he worked as a consultant in a UK-based multi-national company.

The couple got married in the presence of close relatives and friends in the port town in Mugla province on the southern Aegean coast of Turkey. Nusrat’s parents and sister and other close relatives flew with her to Bodrum on June 16.

Bengali actress and Jadavpur MP Mimi Chakraborty, who is one of Nusrat’s friends from the industry, was also present.

Both the actresses who recently became MPs couldn’t take their oath in Lok Sabha because of Jahan’s wedding.

Mimi had also organised ‘Aiburo Bhaat’ (bachelorette feast) as per Bengali traditions for Nusrat in Kolkata before leaving for the D-day.

The couple has planned a gala reception ceremony at a star property in Kolkata on July 4. A large number of Bengali film personalities and political leaders are expected to attend the reception.