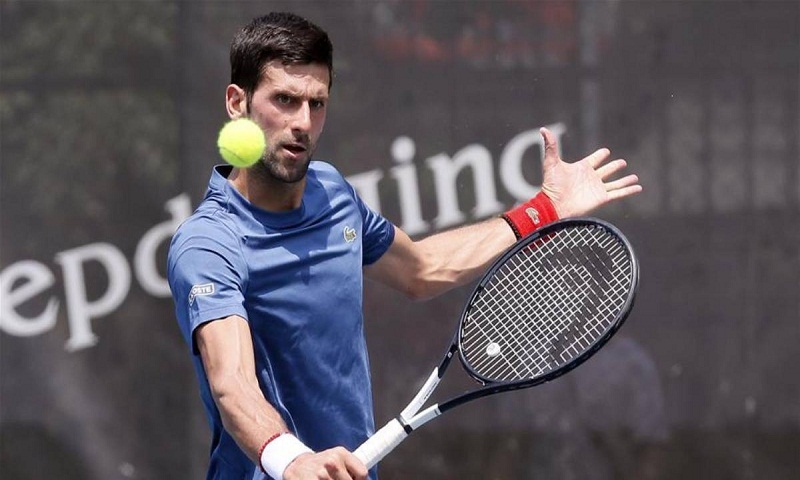 Top-ranked Novak Djokovic said here on Wednesday that he expects biggest competition from both Roger Federer and Rafael Nadal for the upcoming Wimbledon tournament.

After a training, Djokovic who exchanged shots with Viktor Troicki in front of media crews and fans, said he will travel to London earlier to play exhibition matches on grass surface for Wimbledon.

"Situation is different comparing to last year, because last year I did not play many matches in first six months. I had an elbow injury, and dropped to 22nd position of the ATP rankings. Back then I had time to prepare for grass surface, so I played one official tournament, Queens. This year, because of the long season on gravel, I decided to skip it and focus solely on Wimbledon," Djokovic said.

Asked if he expects to defend his Wimbledon trophy, Djokovic said he always had highest goals.

"I am currently on top of the world rankings, and having in mind that I am defending last year's Wimbledon title, it is obvious I am hoping to push to the end. My expectations are one thing, and reality is another thing."

Djokovic said that both Nadal and Federer are other favorites while players such as Stan Wawrinka, Milos Raonic, John Isner and Kevin Anderson are also capable of making upsets during the tournament.

"Of course, here will be also (Stefanos) Tsitsipas, (Alexander) Zverev, younger players such as Dominic Thiem whose game is getting better in other surfaces besides gravel," said Djokovic.

"The tournament will be very interesting. I think that Nadal and especially Federer, are among top favorites for winning the trophy. The tournament lasts for two weeks, and step by step, we will see what can happen.

"But, having in mind the rankings, and the experience in playing grand slams, the three of us are the biggest favorites."

Djokovic also shared his view on the future of tennis when the big trio of Nadal, Federer and himself retire one day.

"Certainly that Zverev is the leader of this new generation, having in mind his results in past several years. Tsitsipas is right behind him, and maybe will soon catch up with him in the rankings," Djokovic predicted.

He also selected some young talents for the future.

"If we don't look at the rankings, there are several players that have the dedication, professionalism and passion and show a great potential. Probably we can look at them as leaders of world tennis in future, and those are Denis Shapovalov, Felix (Auger Aliassime) and Dominic Thiem," Djokovic concluded.