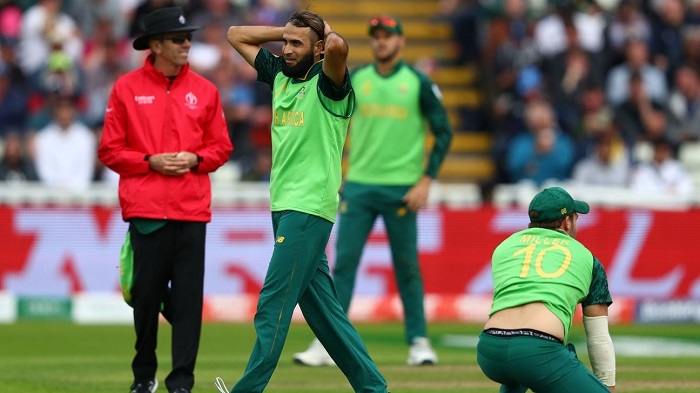 In a low-scoring thriller, South Africa appeared to be putting the squeeze on New Zealand as they entered the 38th over with 74 runs still needed from 72 balls, and just five wickets in hand.

37.1 Imran Tahir to Williamson , 1 run, ccaaaatchh they cry, as Miller rushes to his left , trying desperately to get under the chip from Williamson. He reaches out a hand, hoping, praying, but it lands short of him! Williamson stands and watches it all, his heard beating a mile a minute, hating himself for mistiming a shot meant to go to long-on

37.4 Imran Tahir to de Grandhomme, 1 run, dropped by Miller and it's another really tough chance again! De Grandhomme whips a googly off the back foot, hoping to clear short midwicket. But Miller leaps up and to his right, getting massive airtime, then he sticks out his right hand but it just doesn't stick

37.6 Imran Tahir to Williamson, no run, follows the legbreak - a mistake he doesn't normally do, but here he needs to put bat to ball and get runs, and because of that pressure, he plays a low percentage glide with half a bat and is beaten. Waaaait, replays show Williamson bottom edged it! De Kock didn't hear it. Tahir is appealing. He's shocked no one joins him and South Africa have missed out on a big big biiiiiiiiig break

40.1 Rabada to Williamson, 1 leg bye, Oh my, a comedy of errors at Edgbaston. Awful mix-up between the wickets. Miller fluffs a run-out chance and reprieves Williamson. This was another well-directed short ball at the body, comes off pretty slow off the surface. Williamson is early into the pull and wears it on his body. De Grandhomme wants a single, Williamson doesn't. Rabada, the bowler himself, swoops down on the ball. The throw is to Miller at the non-striker's end. He is in a rush. He is under pressure. He dislodges the bails without collecting the ball. What a big miss for SA. Is that the game? 58 from 53 balls

43.5 Phehlukwayo to Williamson, (no ball) 1 run, Ngidi has dropped it. SA's fielding has gone to pieces. Okay, this is a beamer - well above the waist. Williamson swivels and flaps it in the air to deep backward square moving to his right. It's all happening at Edgbaston. 33 from 31 balls

45.5 Ngidi to de Grandhomme, FOUR, A catching opportunity ends up as a boundary. What're you doing SA? Miller runs in, attacks the ball for the catch, but the ball drops in front of him at deep midwicket. Rabada is at the edge of the boundary running round, he slides, but lets the ball go to the fence. Back of a length and outside off, de Grandhomme smites it away and gets away. 20 from 19 balls

The final over begins with New Zealand needing eight runs from six balls ...

48.1 Phehlukwayo to Williamson, SIX runs, Grant Elliott: 2015. Kane Williamson: 2019. New Zealand are having the times of their lives once again. What an epic century from Kane Williamson. This was full and outside off, Williamson drops down to one knee and smokes it away into the stands beyond midwicket. Williamson eases the helmet and soaks everything in. Scores level

48.2 Phehlukwayo to Williamson, FOUR runs, Williamson - you beauty! It had to end this way, right? That dab down to third man. Back of a length and outside off, glides it away behind point and seals it for NZ like boss. He is the boss