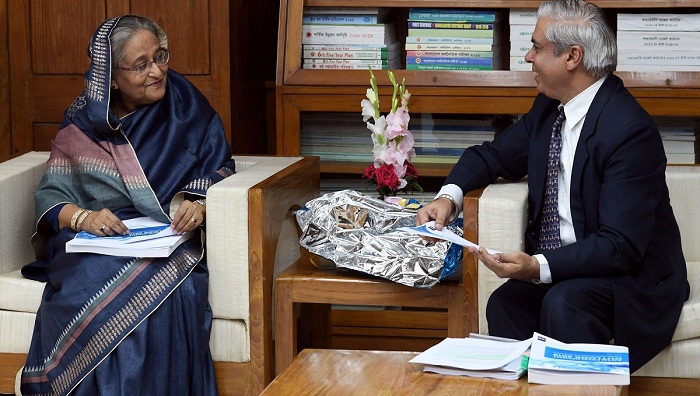 Bangladesh has achieved the fastest growth in the Asia-Pacific economies comprised of 45 countries, according to the Asian Development Bank (ADB).In the outgoing fiscal year of 2018-19, the AD said, the country attained 7.9 percent growth which was fastest expansion since 1974.

The bank predicted that the growth will be 8 percent in the FY2019 and FY2020, terming it a new record.

“Bangladesh will continue to be the fastest in the Asia-Pacific,” the bank said in its Asian Development Outlook (ADO).

ADB Country Director for its Bangladesh resident mission Manmohan Parkash handed over the ADO to Prime Minister Sheikh Hasina at her Sangsad Bhaban office on Wednesday.

The ADO, the annual publication of the ADB, evaluates and forecasts economic performance of the 45 Asian and Pacific countries. It said the growth will be moderate across most of developing Asia -- 5.7 percent in 2019 and 5.6 percent in 2020 from 6.2 percent in 2017 and 5.9 percent in 2018.

The drivers of the growth have been identified as higher public investment, stronger consumption demand, revival in exports, improved power supply and higher growth in private sector credit.

The ADO pointed out that Bangladesh has favourable trade prospects despite a weaker global growth while exports and remittances are likely to increase further.

It also mentioned that strong public investment due to continued policy environment and expeditious implementation of large infrastructure projects and higher tax collection with expanded tax base will move Bangladesh economy further.

It said Bangladesh’s banking system reforms will attract higher private investment which will support the growth.

Sheikh Hasina said the government is gradually advancing the economy in a well-planned manner. “We’ve done our analysis before formulating the budget this year also,” she said.

Briefing reporters, PM’s Press Secretary Ihsanul Karim said, the Prime Minister mentioned that when Awami league was in the opposition, her party had also taken various types of economic programmes for the sake of the country.

“Our Father of the Nation Bangabandhu Sheikh Mujibur Rahman had a vision for developing the country in totality and reducing the gap between the rich and poor and urban and rural areas. We’re working towards that direction,” the Prime Minister said.

She said the government is setting up 100 economic zones in the country where investors from across the globe can set up their industries.

Manmohan Parkash highly appreciated the government’s economic plan under the leadership of Prime Minister Sheikh Hasina, saying all of its development programmes are people-centric.