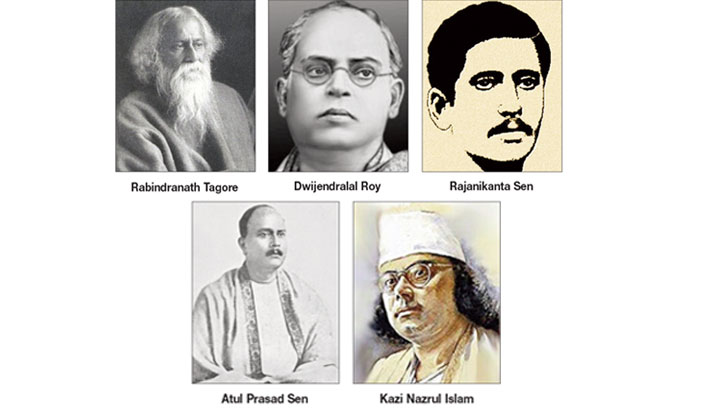 A few days ago, I was giving a lecture to my students on five major poets of Chaucer's age. In the middle of my lecture, I asked them, out of the utmost curiosity, whether they know about our "Pancho Kobi" or not. I was a little disappointed to find out that not a single student in my class knows even the names of all five poets. They only know two names properly and obviously. They are Rabindranath Tagore and Kazi Nazrul Islam. I will never blame them, because our cultural activities have become Tagore-centered and Nazrul-based. They have not been provided with any such exposure to other three poets of this group. I told them to search online. I myself asked Mr. Google by typing "pancha kobi", "poncho kobi" and so on. Although there were news on various events and features on individual poets, unfortunately, I could not find a proper and complete write-up on "Pancho Kabi". So, I thought to write a brief article. At least, the website of Daily Sun will preserve a brief and precise write-up on five major Bengali poets.

"Pancha Kobi" refers to a group of five major Bengali poets who were poets and music composers at the same time. Both their poems and songs are remarkably significant in the development of Bengali music and literature. They possess similar kind of literariness in their works. This is why, they are altogether recognised as "Pancho Kobi". All these poets were born between 1861 and 1899. These five lyricist-cum-poets are: Rabindranath Tagore, Dwijendralal Roy, Rajanikanta Sen, Atul Prasad Sen and Kazi Nazrul Islam. The group begins with the Biswakobi and ends with our rebel poet. Other three poets are lesser known to this generation. However, they are equally important as they have tremendously contributed to make our music artistically and aesthetically richer and deeper. "Pancho kobi" of Bengal wrote on patriotism, nature, monsoon, human relationships and so on. Their lives and works must be known to this generation.

Let's start with our guru, Rabindranath Tagore who is known by his sobriquets Gurudev, Kobiguru and Biswakobi. An introduction to Tagore would be an affectation if I attempt to write so. He is considered to be the greatest Bengali poet who is also a novelist, lyricist, playwright, actor, director, singer, philosopher and so on. He is the first non-European to win the Noble Prize in Literature in 1913 for his tremendously magnificent work Gitanjali. He is sometimes called the "Bard of Bengal". Although he is the most versatile writer of Bengal, many of his works remain unknown to people outside of Indian subcontinent. One of his patriotic songs is our national anthem. Every time we sing "Amar Sonar Bangla, Ami tomay bhalobasi", every time we feel grateful to Tagore for composing such heart touching and emotional song. He has also written the national anthem of India. Tagore's Gitabitan contains almost 2000 songs in it. Most of the songs are yet to be translated. When monsoon comes, we welcome it by singing Tagore's song "Badol diner prothom kodom phool". Tagore has touched almost all kinds of themes that please human minds. His writings are food for our soul, thought, personal and national essence. He has become an inseparable part of our life. The Bard was born on 7th May in 1861. He died at the age of 80 on 7th August in 1941. He has departed physically. He will remain alive through his works as long as the readers survive.

Just after 2 years of Tagore's birth, another star was born in the land of Bengal. He is Dwijendralal Roy, popularly known as D.L Roy. He was born on 19 July in 1863. We are all familiar with the song "Dhono dhanno pushpe bhora". This beautiful melodious song is composed by D.L Roy. I have heard many people saying that this song should have been our national anthem. The tune and lyrics are very lucid, people friendly and adaptable. Ordinary people can easily sing this song. Although he was Tagore's contemporary, he could make his own remarks and established his own style. He has composed more than 500 songs. Most of his works are based on Hindu mythology and nationalism. Like Tagore, he also was well aware of the orthodoxy of his own community. He has satirised the dominance of the upper caste Hindu pandits and masters. Roy is famous for writing patriotic songs which influenced the rebels and revolutionaries of Bengal to stand against all sorts of oppression of the British empire. He died on 17 May in 1913. Interestingly, Bengal achieved one of the most significant and prestigious recognitions when Tagore received the Noble Prize in 1913. At the same time, Bengal lost one of its precious gems in the same year. However, D. L Roy will remain like a dazzling and glittering star in the sky of Bengali literature.

Then after 2 years, another important poet was born. He is Rajanikanta Sen, popularly known for his devotional and patriotic songs. He was born on 26 July in 1865. Many people know and many do not know the fact that the famous "mohanayika" (super heroine) Suchitra Sen is his granddaughter. His writings can be divided into four kinds: devotional, patriotic, humanitarian and satire. He has inherited his talent in music from his poet and composer father Guruprasad. So, it was not very difficult for him to become one of the most important literary figures of his time that he actually was. He was culturally active during the period of Swadesi movement. He intended to inspire the youngsters of then India for the freedom of the nation. He wrote, "We are extremely poor, we are extremely small. Yet we are seventy million brothers, rise up!" His songs successfully injected the sense of utmost patriotism in the revolutionary veins of the young generation. His famous devotional song "Tumi nirmolo koro, mongolo kore" is sung and performed in many musical reality shows. He died at a very tender age. He died in 1910 at the age of 45 only. It is a misfortune for the nation that it lost two of its brightest stars within just three years.

Atul Prasad Sen is another remarkable poet of "Pancho Kobi". He was much younger than the aforementioned poets. He was born on 20 October in 1871. Sen was a poet, composer, lyricist, philanthropist, social worker and educationalist. It is important to note that he used classical form in Bengali music. He introduced thumri style in Bengali music for the first time. He also pioneered Ghazal in Bengali music which was later on enriched by Nazrul. His songs actively motivated the revolutionaries during 1947 and 1971. His patriotic song "moder gorob, moder asha" is played and sung by singers on all the national days of our country. He died in 1934 at the age of 63. His masterful contribution to Bengali music will always be remembered with gratefulness.

The last and never the least poet of "Pancho Kobi" is our national poet, the rebel poet Kazi Nazrul Islam. He was born in 1899--at the end of 19th century. He was brought up in the early 20th century. He has been a writer, poet, composer, actor, social activist, fighter and so on. He produced a large number of poems and songs on various themes. He proactively and loudly raised his voice against all sorts of oppression. His rebellious poems ignite a sense of revolution in the young minds of the readers. He sang the songs of equality, brotherhood and nationalism. He carried forward the legacy of his predecessors. His contribution to the development of Bengali music can never be described in simple words. Nazrul could not receive institutional education. However, now he has become a topic of research for many students. He also wrote devotional songs like his other contemporaries. But the difference between him and others is that Nazrul, being a noncommunist, wrote devotional songs on both religions. He wrote "bhaktigeeti" for Hindus and "Hamd-e-elahi" and "Naat-e-rasul" for Muslims. He wanted to establish communal harmony in Bengal. Nazrul lost his voice and sense at the age of 40 only. But whatever he did in his active periods are unmatchable. He died in 1976. We find Tagore in our heart and Nazrul in our essence.

These five poets have contributed a lot to the development of Bengali music and literature. Their names, lives and works should be known to this "online" generation. Their works must be translated and made available online. Although they are not physically alive, they are metaphorically active. In Shakespeare's words, we can convey our message to bards,

So long as men can breathe, or eyes can see,

So long lives this, and this gives life to thee.

This "thee" is a plural "thee" which refers to all five poets of "Pancho Kobi".