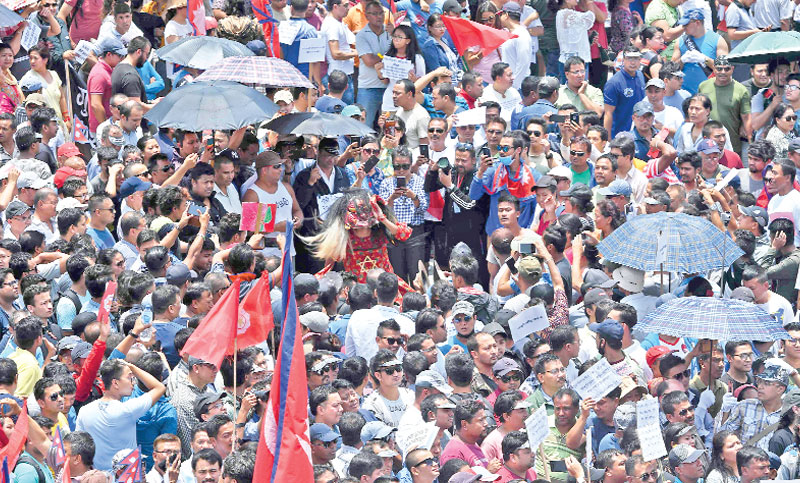 KATHMANDU: Thousands of Nepalis took to the streets on Wednesday demanding the government scraps a bill that stands to interfere with a centuries-old trust system integral to the country’s cultural heritage, reports AFP.

The bill is among several registered by the current communist government in recent months that has triggered a public outcry and accusations of narrowing civil space and freedom.

The system, known as “guthi”, is rooted within the Newar community indigenous to the Kathmandu Valley. It has a special role in maintaining temples and traditional public spaces, as well as organising festivals and religious parades.

“They are attacking our heritage. Guthi has been part of our culture for generations and we will not let the government take it away,” protester Nani Maiya Maharjan told AFP.

A series of protests began after the government registered the bill in late April, envisioning a new authority that will govern all guthis and remove the current local trustees. In a protest earlier this month, police used water cannons and batons to disperse demonstrators.

Wednesday’s mass protest took place despite a government announcement the day before to withdraw the bill and hold discussions with concerned stakeholders. “We are here to warn the government. We will not back down until the bill is scrapped,” said Rajan Kansakar, a student at the protest.

There are over 2,000 public guthis in Nepal under an independent umbrella body which currently oversees the trusts. Guna Raj Luitel, editor of the Nagarik newspaper, said that the government was showing “authoritarian” tendencies.

“We are seeing is that the government feels it can do anything with its majority in the parliament. It is seeking to concentrate power while silencing the people,” Luitel said.

The current government came to power after a landmark victory in the 2017 elections, winning a strong majority in both houses of parliament and six of the seven provincial assemblies.