Four charged with shooting down MH17 plane over Ukraine 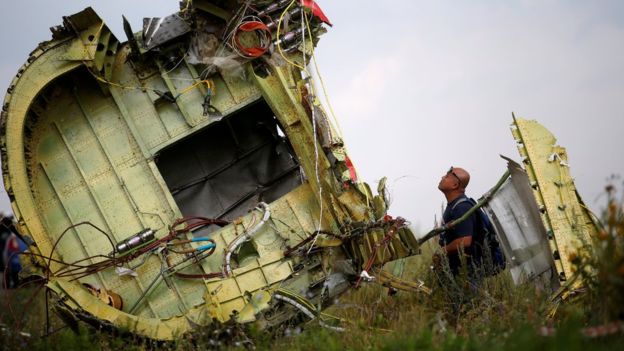 For the first time since Malaysia Airlines flight MH17 was shot down in July 2014, prosecutors have announced charges against suspects in the case.

Three Russians and a Ukrainian have been charged with bringing a missile into the area in eastern Ukraine and with murdering 298 passengers and crew.

Passenger flight MH17 was en route from Amsterdam to Kuala Lumpur when it was shot down over conflict-hit Ukraine.

A court case will begin in the Netherlands on 9 March 2020.

International arrest warrants have been issued for the four men.

The JIT, which seeks to try the suspects under Dutch law, previously said it had a "long list" of persons of interest and appealed again for witnesses as the investigation continues.

The others charged are:

"The JIT suspects Girkin, Dubinsky, Pulatov and Kharchenko of having played a significant role in the death of 298 innocent civilians," said prosecutor Fred Westerbeke.

"The means of evidence these suspicions are based on will be elaborated on during the criminal proceedings, then the judge will pass sentence. The suspects are innocent until the contrary is proven in court."

He added that investigators had "evidence showing that Russia provided the missile launcher".

Kremlin spokesman Dmitry Peskov earlier told the BBC Russia had been given "no chance to take part" in the official investigation.

Asked whether Russia would hand any suspects over for trial, he said Moscow's position was "very well known" but declined to comment further.