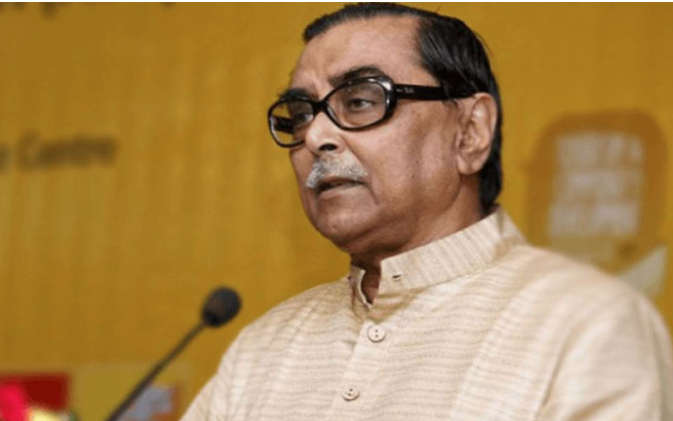 Though Bangladesh has made a good progress on economic front, the crisis in the economic sector remains to be a barrier to its way to further development, Workers Party chief Rashed Khan Menon said on Wednesday.

“No one is unaware about looting in the banking sector, anarchy and indiscipline,” he said taking part in the general discussion on the budget for 2019-20 fiscal in Parliament.

Menon said the banks now have hunchbacked due to the huge default loans as the liquidity crisis prevails.

“In the budget this year, an allocation has been made to mitigate the capital deficit from taxpayers’ money,” he said.

About the central bank’s role, the former minister said it has failed to play an effective role in monitoring the banks. “They couldn’t manage their own money…the people of the country didn’t find any accountability in this regard.”

The Workers Party leader said allowing new banks on political ground, placing banks in the line of family business and controlling the banking sector by the same person and remaining owner of more than one banks; and CRR fixation by bank owners association are behind the pity condition of the banking sector. “They even flouted the Prime Minister’s directives saying that the bank interest rate cannot be fixed by an order,” he said.

Menon said the Finance Minister in the budget speech talked about some reforms of the banking sector, but those are in fact in ‘future tense’. Even the formation of the Bank Commission has been subject to discussions.

Referring to the stern action against the willful loan defaulters in the budget, the Workers Party chief said Bangladesh Bank as per the advice of the Finance Ministry a couple of days back awarded the loan defaulters. “If the High Court had not issued any stay order on that it would have come into effect from May,” he said.

He also questioned the identification of the willful loan defaulters.

To mitigate the budget deficit, Menon said, the government will take Tk 47,364 crore from the banking sector and it will contribute more to the ongoing liquidity crisis. “The private investment will come down further… there’ll be no employment…all are linked with one another,” he bemoaned.

He also criticised the Finance Minister saying that he admitted that he has no control over the capital market.

Menon said it is now the matter of observation what would be the effectiveness of the steps which the Finance Minister stated in the budget speech without identifying the culprits in the capital market.

Appreciating the Finance Minister for increasing the tax-GDP ratio to 14 percent from the existing 10 percent through expanding the tax net, he said the biasness towards the rich in the revenue collection can be seen with open eyes. “There’s no need to be experienced in economics for this.”

Workers Party leader mentioned that wealth of the country now got accumulated in the hands of some 10 percent ‘super rich’ who are controlling about 90 percent of the total wealth.

“They are basically ‘rent seekers’. They’ve created a circle around power for looting, grabbing, controlling. Country’s all the banks, insurances, real estates and even sending manpower are under their control.”

Menon said there country now has disparity in rural and urban areas apart of region-to-region inequalities.

Regarding the social safety net, he said the allocation of the budget is a drop of dew in an ocean.

He said there is no specific proposal in the budget for creating three crore jobs in the country by 2030.

Slamming the scope for whitening black money in real estate sector, Menon said the prices of flats and lands will go beyond the reach of the middle class due to this. “It’ll also encourage immorality.”

He urged the Finance Minister to increase the allocation for the Startup Fund from Tk 100 crore.

He said if different parts of the government control the elections then political parties will lose their relevance not only in the elections, but also in running the state. “This is applicable for all and also for Awami League.”