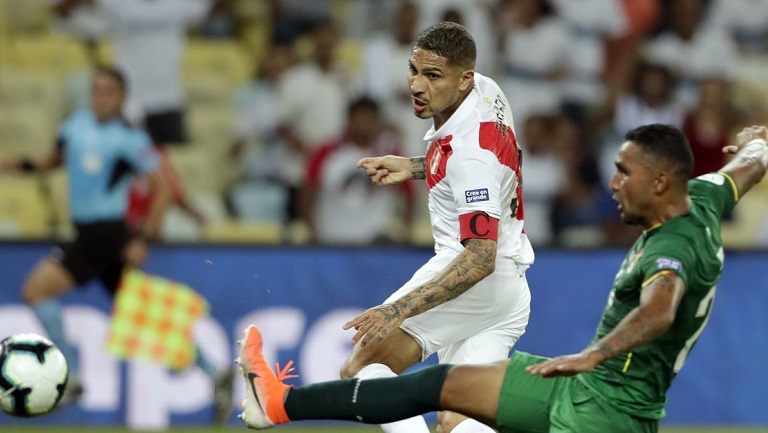 Striker Paolo Guerrero led Peru to a key 3-1 win over Bolivia on Tuesday that improved the team's chances of advancing to the knockout stage of Copa America.

Guerrero scored a goal and had an assist that allowed Peru to recover against a weak Bolivia side.

Nearly 25,000 noisy fans at the Maracana Stadium, mostly Peruvian, watched a low-quality match in an arena that was only one-third filled.

Bolivia opened the scoring at 28 minutes after a penalty awarded after video review, with striker Marcelo Martins scoring to the right of Peru's Pedro Gallese.

Despite holding 60% of ball possession until the break, Peru only leveled the score at 45 minutes with the team's most recognizable player.

Christian Cueva found target man Guerrero in the middle of the Bolivian defense. The veteran ran to the right past goalkeeper Carlos Lampe and gently pulled the ball past the goal line.

Peru didn't change much after the break, playing with a slow flow that created few opportunities.

Still, the Peruvians quickly found a second goal, once again thanks to Guerrero.

At 55 minutes, the striker assisted Jefferson Farfan with a cross from the left that ended in a close-range header finding the back of the net.

Bolivia squandered other chances in front of Gallese, but the goalkeeper himself did not have to make any difficult saves.

At 96 minutes, when the match already seemed settled, substitute striker Edison Flores added a third from the edge of the box after a counterattack.

Peru will host Brazil on Saturday at the Arena Corinthians in Sao Paulo. Both teams have four points in Group A, but the Brazilians lead on goal difference.

On the same day Bolivia and Venezuela will play at the Mineirao Stadium in Belo Horizonte, in a match organizers expect to have one of the smallest crowds of the tournament.

Venezuela has two points after two games, while Bolivia has zero.