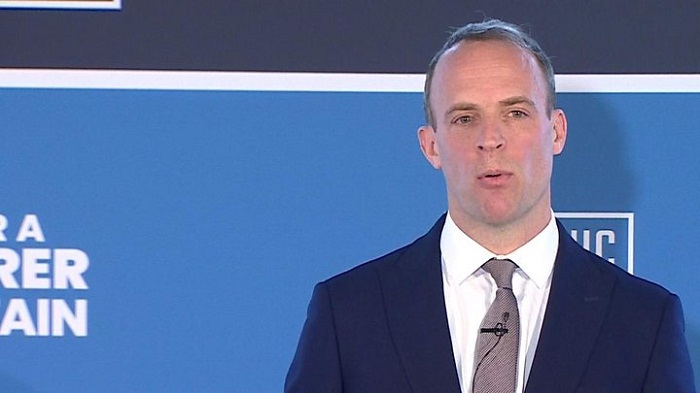 Dominic Raab has been knocked out of the Tory leadership race in the latest ballot of MPs, leaving five candidates in the battle to be the next PM.

Boris Johnson once again came top of the second ballot, with 126 votes - 12 more than in the first round.

Jeremy Hunt, Michael Gove, Sajid Javid and Rory Stewart also got enough votes to make it into the next round.

Raab did not get through, after getting 30 votes, three less than the minimum needed.

The former Brexit secretary had called for the UK to leave the EU without a deal on 31 October if necessary.

He also caused controversy by refusing to rule out suspending Parliament to thwart attempts by MPs to block a no-deal exit.

The surviving five candidates will take part in a live BBC debate in central London at 20.00 BST.

Gove and Javid also increased their level of support - by four and 10 votes to 46 and 33 votes respectively.

But it was Rory Stewart, the international development secretary, who made the biggest stride forward, nearly doubling his backing from 19 to 37 votes. 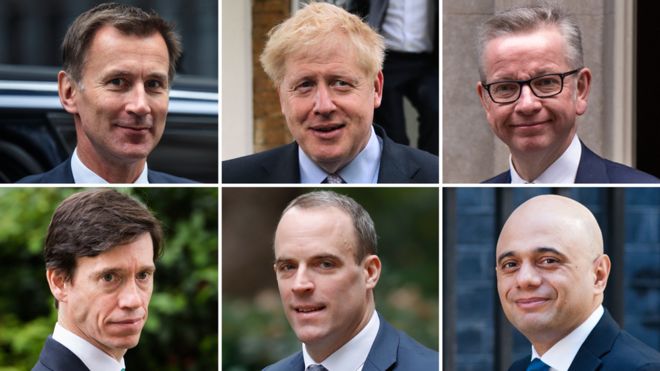 Tory MP Gillian Keegan said Stewart was appealing to his colleagues because of his "realistic plan" for Brexit and his progress showed there was a "market for honest politicians".

"I think Rory is extraordinary. He has star quality you don't often see in politics."

Johnny Mercer, a supporter of Johnson, said he was pleased by his performance but conceded the contest "was not done yet".

Defence Secretary Penny Mordaunt, who is backing Hunt for the top job, said he remained in a "strong" second place.

She told the BBC the foreign secretary remained "a serious candidate for a serious job".

The BBC's Nicholas Watt said he had been told by a source close to Javid that he would not be dropping out of the race even though he secured the lowest number of votes.

Simon Hoare, one of Javid's backers, said he was "delighted" the home secretary had made it through to the next stage.

He said "barring emergencies" Johnson would make it into the final two candidates and appealed to Tory MPs to think "tactically" about who should join him.

The remaining candidates will face further ballots later this week, where the lowest-ranked MP will be knocked out until only two are left.

The final two names will then be put to a postal vote of the 160,000 Tory party members, beginning on 22 June, with the winner expected to be announced about four weeks later.