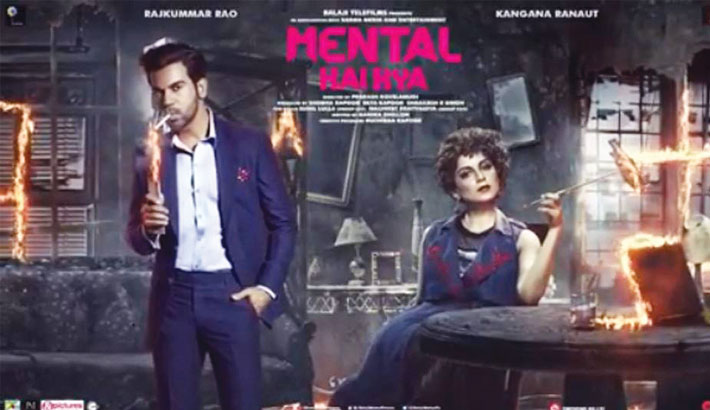 Actors Rajkummar Rao and Kangana Ranaut’s Mental Hai Kya prepares to release on July 26. Ahead of it, the makers of the film has released a new motion picture, which tells us a little more than is known about the film, reports Hindustan Times.

Sharing it, Rajkummar wrote: “These suspects will set the world ablaze! Whose side are you on?”

The motion poster opens with Rajkummar holding a cigarette in his mouth. He is in a blue and white semi western formals and looks intently at the camera. Soon, we see Kangana in the frame, seated on a table next to him. She too has a blue dress on, her curled short crop draws attention, as much as her severe expression. Soon, many things inside the room soon start burning, including a laptop and the window panes. We also get to know that there will be a murder in the film and that there will be two suspects, namely Rajkummar and Kangana.

Nothing much was known about Kangana’s Mental Hai Kya. However, the quirky posters and stills released by the makers in the past have certainly piqued the interest of the audience. Earlier this year, the film was in news after it came to light that Mental Hai Kya and Hrithik Roshan’s Super 30 were to clash on the box office. However, the makers of Super 30 shifted their release date to avoid a needless clash. Hrithik issued a statement in May, saying: “I have decided to shift the release date of my film ‘Super 30’ in order to save myself from the personal trauma and toxic mental violence this would cause. Despite the film being ready, I have requested my producers to shift and announce the next suitable date as soon as possible.”

Reacting to it, Kangana was quoted by IANS as saying: “Hrithik Roshan, Madhu Mentena and Ekta Kapoor had collectively decided that Hrithik would push the release date of Super 30 and Ekta will bring her film Mental Hai Kya on July 26. They had taken this call last week itself. I don’t know why he wrote this sob story, but I am glad Mental Hai Kya is getting a solo release. I salute my producer Ekta Kapoor for making her way in this male-dominated industry. It’s not easy to do what she does.... I applaud her courage and power.”