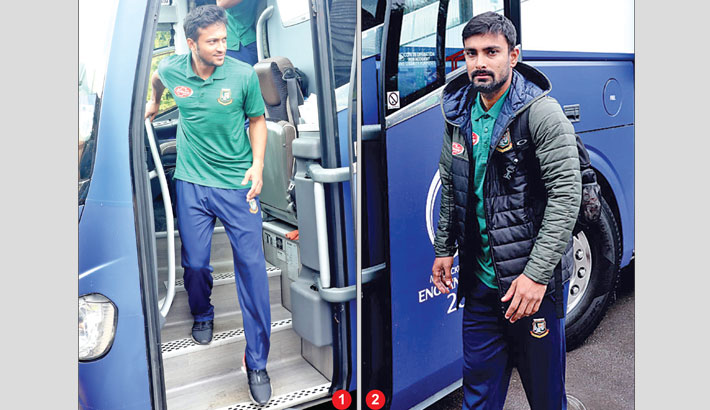 Bangladesh batsman Liton Das credited ace all-rounder Shakib Al Hasan for releasing the pressure from his shoulder as well as guiding him in the middle against West Indies while Liton added that he was satisfied to be able to stay in the crease till the end.

Liton, who usually plays as an opener, was demoted down the order against West Indies as he replaced Mohammad Mithun in the playing eleven for Bangladesh and he paid back the faith put on him by management in style by scoring unbeaten 94 runs coming at number five.

Liton supported Shakib like an experienced middle-order batsman and in the process the duo added undefeated 189 runs for the fourth wicket to help them earn a seven wicket win over West Indies.

“The way Shakib (bhai) batted, some of his boundaries helped me a lot and that helped me to release the pressure,” he said.

“At the end of the match, I want to say that I never felt this way,” he said. “I scored a lot of runs in the domestic league but never finished any game. It was a big achievement for me as I finished today’s match and that too in a big event like the World Cup,” he said.

“I didn’t have much to say to Shakib bhai. The one thing I have said to him that, opportunities like this doesn’t come too often, if you remain unbeaten your runs will increase and you will also be able to handle the match pretty well,” he added.

“We always want to score as a player and we also want our partner to score as well because it’s a team game actually. When he was scoring I felt really well,” he said.

“I think, when I was scoring he also felt really well because when I scored my fifty he came running towards me and gave me a hug. He also knew that I am new to this and it’s a very challenging phase for me. So, he helped me a lot today,” he stated.

Liton, playing in the middle-order in the ODIs for the first time, added that he was in pressure until he reached 30 runs, and only afterwards did he feel that he had adjusted well enough to come out of the shell.

“After scoring 30 runs I became a bit relaxed. I was in pressure at first. I was nervous too. I felt everything was against me. But after I scored 30 runs then I realised that I have adjusted with the wicket very well and I will be able to play the way I want to play. I felt comfortable after scoring 30 runs,” he said.

“The thing is that I have played in Ireland long time ago, and then today (Monday) I face Windies. When you stay out of match for a long time you don’t get the match feeling,” he said.

“Overall I think at first I was very nervous because I was out of the game for a long time, playing in a match is different, fielding and supporting your team is another thing. I was lagging behind in that regard,” he said.

“Playing today was important because I think when you play a match your nervousness goes away and these things will help me a lot I think in the coming days,” he said.