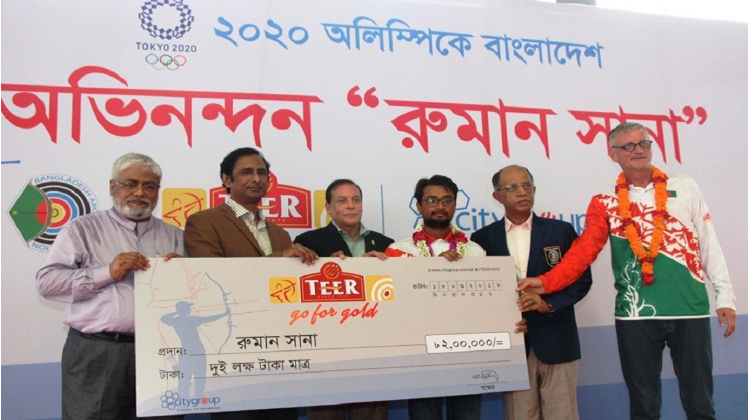 Mohammad Ruman Shana, who won Bangladesh’s first-ever bronze medal in the World Archery Championship, got warm reception after his arrival in Dhaka with Bangladesh team on Tuesday morning.

Shana also qualified for the Tokyo Olympics 2020 as the first Bangladeshi archer on merit.

Soon after his arrival at Hazrat Shah Jalal International airport in Dhaka Tuesday morning from the Netherlands after participating in the World Archery Championship, Shana was greeted by State Minister for Youth and Sports Zahid Ahsan Russell MP.

Later, Shana was taken to Sheikh Russell Roller Skating Complex on the Bangabandhu National Stadium premises for a grand reception at noon.

City Group (Teer), the sponsor of Bangladesh Archery Federation, awarded Tk 2 lakh to Ruman Shana for his feat in the World Championship.

An elated Shana expressed his total satisfaction for his outstanding performance in the World Championship during the reception at the Sheikh Russel Roller Skating Complex on Tuesday.

“Alhamdulillah I am very happy. I cannot explain it in words but can feel. Really, it’s a matter of great joy,” he said.

Shana said also “My main target was to qualify for the Olympics and I achieved the target, now, my next target is to win Olympics medal.”

The 24-year-old archer from Khulna has become the second Bangladeshi athlete to qualify for the Olympics on merit after golfer Siddikur Rahman, who took part in the Rio Olympics in 2016.

In the bronze medal match on June 16, Shana beat Mauro Nespoli of Italy by 7-1 set points in the men’s individual recurve at s-Hertogenbosch in the Netherlands.

Earlier, Shana confirmed his place for Tokyo Olympics 2020 as the first archer of the country beating Van Den Berg Sjef of Netherlands by 6-2 set points in the quarterfinal.