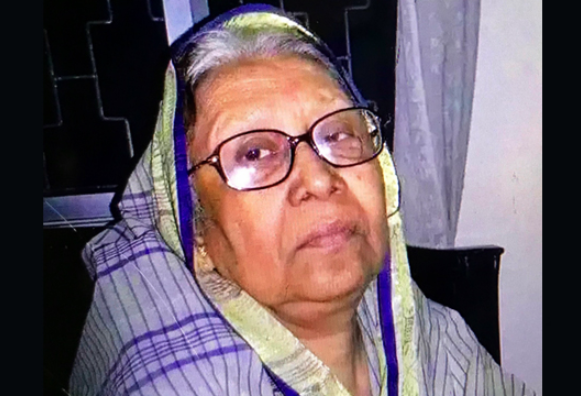 Anisa Haidar, wife of Ekushey Padak-winning writer and litterateur Rashid Haidar, was laid to eternal rest at Azimpur Graveyard in the city after Asr prayers today.

Before the burial, her namaz-e-janaza was held at Dhaka University Central Mosque after Asr prayers, family sources said.

A milad and doa-mahfil will be held on June 21 (Friday) after Asr prayers at House number-19 at teacher’s quarters in city’s Fuller Road area seeking her eternal peace, they added.

She breathed her last around 11 am at the Holy Family Red Crescent Hospital here at the age of 77.

Anisa had been suffering liver cirrhosis for a long time.

She left behind her husband, two daughters and grandchildren as well as a host of relatives and admirers to mourn her death.

Anisa Haidar’s one of the daughters Shaonti Haidar is an associate professor of Dhaka University’s Mass Communication and Journalism Department.

He prayed for eternal peace of the departed soul and conveyed sympathy to the bereaved family members.