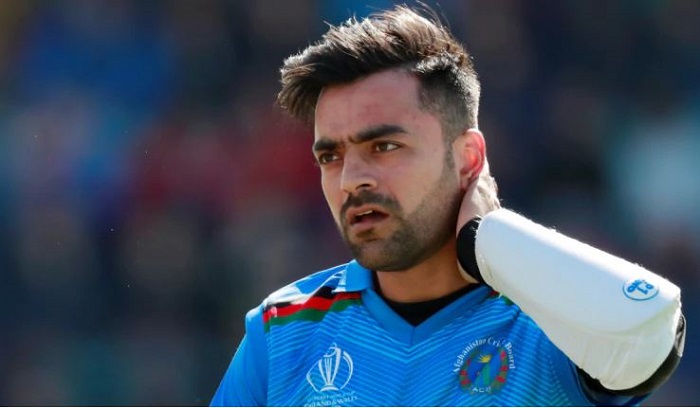 Rashid Khan set an unwanted record with 0-110 in nine overs against England at Old Trafford on Tuesday.

Rashid Khan's 110 runs conceded in 9 overs is the worst economy rate in ODI cricket, and the most number of sixes conceded by a bowler.

Afghanistan ace spinner Rashid Khan created an embarrassing record that he will want to forget always.

The spinner registered the worst ever figures by any bowler in the history of the World Cup.

The mystery spinner, who has built a reputation for himself with impressive performances in T20s, was taken to the cleaners by English batsmen, who tonked him all around the park en-route a staggering total of 397 runs in 50 overs.

Rashid, who often troubles the batsmen with his variations and turn, was a no-match for the English batsmen as he recorded worst ever figures in World Cup history.

He surpassed former New Zealand pacer Martin Snedden, who had conceded 105 runs in 12 overs against England in a World Cup clash at the Oval in 1983.

West Indies pacer Jason Holder is third on the list having conceded 104 runs in ten overs against South Africa in Sydney during the 2015 World Cup.

Rashid's spell is also the third most expensive spell in ODI history with only Australia's Mick Lewis and Pakistan's Wahab Riaz ahead of him.

It was a woeful bowling effort from Afghanistan as England missed the 400-run mark by just three runs.