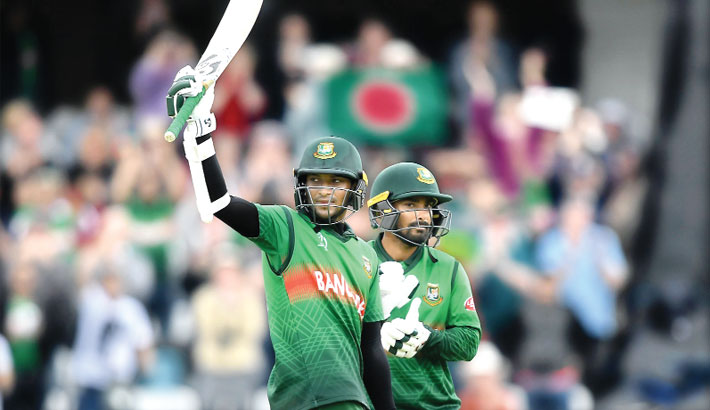 Shakib Al Hasan celebrates with Liton Das after scoring a century against West Indies in their ICC World Cup 2019 match at The County Ground in Taunton on Monday.

After sealing a stunning win over West Indies in the Monday’s ICC World Cup 2019 berth, Bangladesh team is being praised all over the world.

Fans, experts and cricket enthusiasts from all walks of life in home and abroad stormed in on social media platform Facebook and twitter with complimenting tigers and best one Shakib.

Ace all-rounder Shakib Al Hasan’s century powered his team to a seven-wicket win in the game against Windies at Cooper Associates County Ground in England.

Shakib was adjudged the player of the match for his brilliant batting and bowling performances. He scored 124 runs off 99 balls and picked two wickets.

It was not only the second-highest successful run-chase in World Cup history, but also by far the best batting display by the Tigers in Taunton.

This was such a clinical performance that the former cricketers and common people go abuzz in social media to appreciate Bangladesh’s victory.

Former Indian cricketer Irfan Pathan is also impressed with Shakib’s brilliant 124 runs. He believes Bangladesh won the match because of the phenomenal talent of number one all-rounder Shakib Al Hasan.

Pathan Tweeted “After beating South Africa, Now again wonderful chase by Bangladesh against West Indies. It was pure brilliance from Shakib Al Hasan to win the game for them.”

Former Indian batsman and commentator VVS Laxman was amazed to see how easily Bangladesh chased down that mammoth total. He hailed Shakib Al Hasan for his back to back hundreds but he was more impressed with Liton Das because of the maturity he showed in his World Cup debut.

“Congrats Bangladesh on the win. Amazed to see how easy they chased down such a mammoth total. Shakib played with lot of responsibility to get his 2 consecutive 100 but I was very impressed with the maturity shown by young Liton Das.”

Another Indian legend and former Indian Captain Sourov Ganguly applauded Bangladesh for their great success. He advised Bangladesh to play the same way in the remaining matches.

“Well done Bangladesh. So good to see so much character in the team. Shakib Al Hasan and Bangladesh keep playing this way.”

“This is one of the most powerful batting performances I have seen from Bangladesh and I have been watching them for a while.”