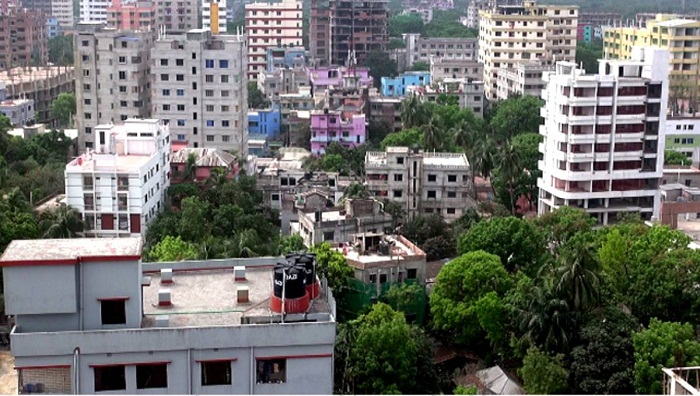 The district town of Faridpur is experiencing a building construction spree as elsewhere in the country, but over 75 percent of those have been built here flouting the building code.

Bangladesh National Building Code and certain rules of the Fire Service and Civil Defence, and the Department of Environment have to be followed for constructing a building. However, most of the owners are flouting these rules while constructing buildings in the district town.

During field visits, this correspondent found most of the buildings in many areas, including Niltuli, Jhiltuli, Janata Bank Mor, Khabaspur, Laxmipur and Alipur, were constructed violating the rules.

Most of the buildings do not follow the approved designs and they lack fire safety measures, putting the lives of inmates at risk.

Assistant director of Faridpur Fire Service and Civil Defence Mamtaz Uddin Ahmed said 75-80 percent of over 200 buildings in the district town have no proper approval.

Mentioning that they are capable of dealing with a fire upto maximum 5th floor, he said, “It’s hard to say what will happen if a fire strikes a floor above.”

Allegations are there that the municipality authorities do not monitor whether the due rules are followed while constructing structures.

Faridpur municipality mayor Sheikh Mahtab Ali Methu also admitted it, saying they cannot properly monitor the construction of buildings for lack of required manpower. “Even then, we’re trying to ensure so that all abide by the rules.”

Omar Ali Khan, owner of local Shah Farid Real Estate company, blamed the government officers concerned for this, saying, “Why won’t we follow the rules if they force us to do so?”

He also alleged that no file is approved in a government office without money.

Women leader Asma Akhter said even the owners face the risk if buildings are constructed flouting the rules.

Admitting it, Deputy Commissioner of the district Umme Salma Tanjia said action will be taken against the owners of illegally-constructed buildings.

She said work is underway to prepare a list of such buildings. “The decision will be taken after discussions with the owners,” she said, adding that all will be forced to abide by the rules.