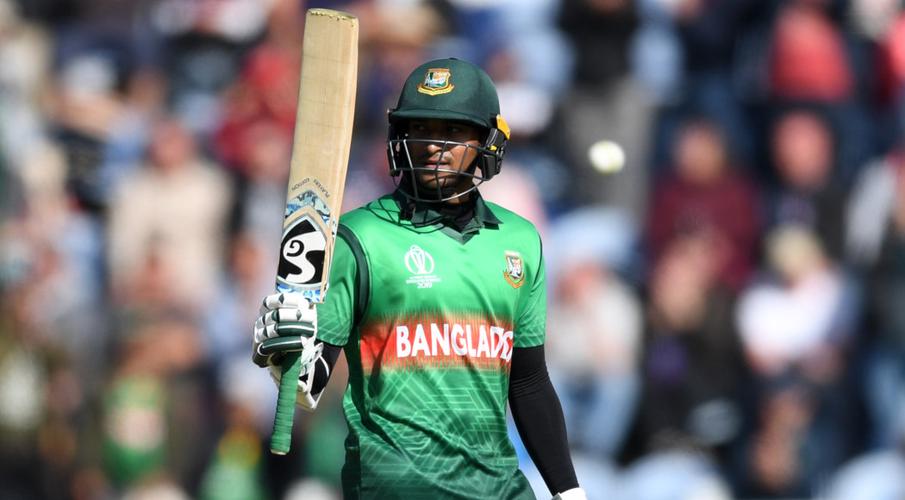 It was the crack of the ball on bat which told you Shakib Al Hasan had got it, the speed of the ball racing through mid-on for four further proof. The delivery from Shannon Gabriel was quick, on the fuller side of a good length, around and about off-stump. Probably just where the bowler wanted it. Shakib stood tall, punched the ball hard, straight. It was a shot which said, I'll hit your good balls for four. Shakib had already hit a truckload of bad balls to the boundary. Where are you going next Shannon? Good ball or bad, I'm here. You can't bowl to me today.

To be fair, not many have been able to bowl to Shakib at all this tournament. He has 384 runs at an average of 128. Consecutive hundreds against England and West Indies, half-centuries against South Africa and New Zealand, leading the competition's run scoring charts. Moved up to number three just before the tournament, he has embraced the extra responsibility of being Bangladesh's main man. Don't forget he has five wickets too. He has been the player of the World Cup so far.

Here, it was the intent Shakib immediately showed which made you think something special was in the offing. His first ball was driven for three off Andre Russell. Third ball, he crunched a pull shot, one bounce, to the fielder on the ring at midwicket. He just nailed it. It didn't get him a run but Russell, bowling quickly and aggressively, was put in his place. Jason Holder was put in his next over when Shakib walked at him and flat-batted a good length ball down the ground for four.

These were not just mere flourishes. These were sledgehammers to the psyche of West Indies.

Shakib is a slight man compared to, say, the muscle and bulk of Chris Gayle. But he hits the ball incredibly hard, harsh on anything short or anything full. If a West Indian bowler was slightly off today, Shakib just smashed it. Not the brute force type of smashing of some lesser players who base their game on the weight room and a baseball swing.

No, this was inherent timing and power, effortless but impactful, never looking like he would mistime a ball. These were cricket shots, all round the wicket, front foot and back, racing across the turf. It's a menacing ability, destruction without any noticeable signs. Shakib was the Bengal tiger waiting for his prey to make a tiny error of judgement before pouncing. Except he wasn't hiding in the undergrowth. He was there in plain sight. And still West Indies could do nothing.

His hundred came from 83 balls of demoralising, relentless aggression. There really was nowhere to go for West Indies. Jason Holder's men tried to impose their will on Bangladesh. They bowled short and fast, picked five quicks to do the job. But none of the Bangladeshi batsmen were intimidated. Shakib certainly wasn't. He cut and pulled West Indies to distraction, nine of his 16 boundaries coming from short balls. The old line about Asian batsman being vulnerable to the short stuff does not apply to Shakib. He lives for it, grabs his knife and fork and tucks in.

Whether the continual short ball ploy was the smartest idea is another matter. West Indies tried it against England and got thumped. They tried it here and got thumped. As tactics go, it might need a re-think. Or at least an alternative like, maybe, playing a spinner or pitching it up. They could also have caught Shakib when he gave them a solitary half-chance, top edging a hook towards fine-leg which ended up landing between Shai Hope and Gabriel. It should have been taken.

Even when he wasn't hitting the ball to the boundary, Shakib kept rotating the strike. He has perfected the forehand passing shot down to third-man for one, a release that Hope, who used up 48 dot balls in his innings, might want to try and emulate. Shakib scored 41 singles and eight 2s in all. He is always moving forward, always taking the game to his opponents, never passive. West Indies, out of breath and wheezing, could not get off his treadmill to take stock and pull things back. It's what the very best players do and make no mistake, Shakib, now with 6,101 ODI runs to his name, is in that club alright.

Liton Das seemed to take a lead from his more experienced partner. When Das came to the crease, Bangladesh were 133-3 and the game was still in the balance. Yet he didn't get stuck, he didn't use up balls. He rotated the strike, chipped in with a boundary here and there but importantly kept Shakib on strike as much as he could so Bangladesh didn't lose momentum. Then gradually he moved through the gears. Once he had passed 50, Das hit three consecutive sixes off Gabriel, one pull, one straight, one hook. He finished on 94 not out from 69 balls. Anything you can do Shaki, bhai.

Bangladesh's opening game victory against South Africa was a statement of intent but this was a different triumph. A must-win game, their World Cup hopes hanging by a thread after two defeats and a washout since that famous day at The Oval, the pressure was on. Once West Indies had made 321, it ramped up and Bangladesh were always going to need a hundred from someone. They didn't just get a hundred, though. They got one of the best hundreds you will ever see.

When they needed a leader, it was no surprise that Shakib stuck his hand up. He has been doing that for more than a decade in the green of his country, the best player Bangladesh have ever produced, an all-rounder of the very highest class and arguably the best in the world right now. He simply would not be denied today. From the first ball of his innings, West Indies knew it. He made them know it. Forced it down their throats and then he never let them off the turf. It's what the world's best do. It's what Shakib does.