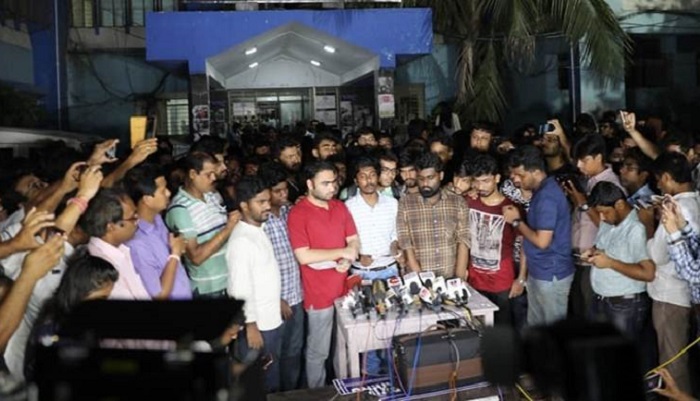 Protesting doctors in West Bengal on Monday announced to end their week-long strike after Chief Minister Mamata Banerjee assured them of steps to step up security across government hospitals in the state.

The decision was taken after a delegation of 31 junior doctors and medical students, held a 90-minute meeting with the Chief Minister along with administrative and police officials, at Nabanna (state secretariat) later in the day.

Earlier, Mamata had called for a meeting at the secretariat while the doctors demanded her presence at the NRS Medical College and Hospital, where the death of a patient followed by an attack on two junior attacks triggered the strike. The protesters, however, today agreed for the meeting at Nabanna.

“We extend our heartfelt gratitude to the Chief Minister. We withdraw our cease work. Our meeting met with its logical end. We also extend our gratitude to the patients, common people, intellectuals, senior and the medical fraternity,” the junior doctors read out a statement at NRS late on Monday.

“In the words of the Chief Minister, no one should raise their hands on the doctors. She has zero tolerance,” the group added.

During the meeting with the agitating doctors, Banerjee said, “I have accepted all your suggestions. I will request you to return to work. We are proud of our doctors. Attacks on doctors will not be tolerated. But not all relatives of patients are bad, only a small section gets agitated after a mishap.”

She added, “We will try and prevent such incidents. We will take everyone into confidence. Even in 0.1% of the cases, police will take strong action. I will shortly visit the doctor who is injured. I feel bad that I could not visit him.”

Various issues, ranging from security to infrastructure, were discussed at the meeting in which the Chief Minister assured to address the grievances of the junior doctors.

“We are satisfied after the meeting. We will end the strike. But I humbly request you (Chief Minister) to allow us to announce it at NRS hospital which is the epicentre of the agitation,” Archisman Bhattacharya, a medical student from Calcutta Medical College, who was among the representatives present, said.

The junior doctors had decided to go on strike after two of their colleagues were thrashed by the relatives of a patient who had died at NRS hospital on June 10. The protests eventually spread to the remaining 13 medical college and hospitals in the state and later across the country.

A day after the incident, Chandrima Bhattacharya, MoS health and family welfare, visited the protest site along with the director of medical education and Kolkata police commissioner.

On June 13, the Chief Minister had also issued an ultimatum of four hours to the junior doctors to resume work or face action. This further infuriated the protesters who asked Banerjee to withdraw her statement and vowed to continue the agitation till their demands were met.

Meanwhile, patients continued to suffer across government-run hospitals in the state. Besides emergencies, all other services, including OPDs, were affected.