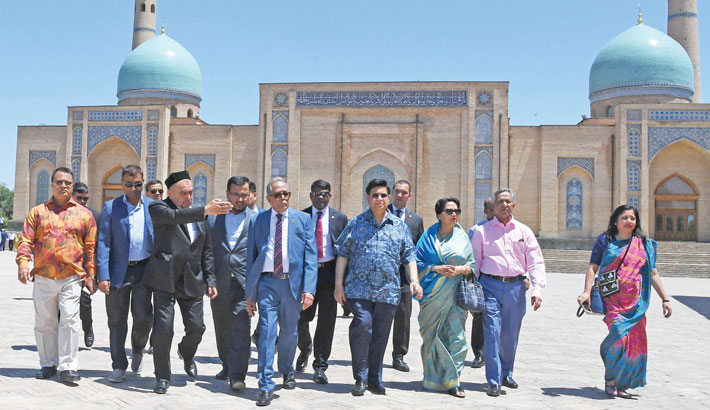 The President, along with his family members, visited the Hasti Imam Mosque this morning.

Deputy Prime Minister of Uzbekistan Abdul Hakimov received the President there, where he stayed for some time.

Later, the President arrived the Amir Temur Museum here at about 12:20 pm (local time) and stayed there for one hour. He also talked to a reporter of Uzbekistan National Television Channel.

During his interview, the President highlighted the existing bilateral relations with Uzbekistan and lauded the nice collection and representation of the traditional and historical incidents of Uzbekistan.

Earlier on his arrival, President Hamid was welcomed there by museum authority in Tashkent.

Later, the President signed the visitor’s book at the Amir Temur Museum lauding the arrangement of the museum that depicted the national customs and culture of Uzbekistan.

Abdul Hamid wished a lasting friendship between Bangladesh and Uzbekistan.

Earlier, President Hamid arrived at Bhukhara International Airport in Bukhara city, yesterday, after attending the filth summit of the Conference on Interaction and Confidence Building Measures in Asia (CICA).

A VVIP special flight of Uzbekistan airforce’s aircraft carrying the President and his entourage members, landed at Bukhara International Airport at about 1:25 pm (local time).

The President will attend some programmes as part of his seven-day official visit.