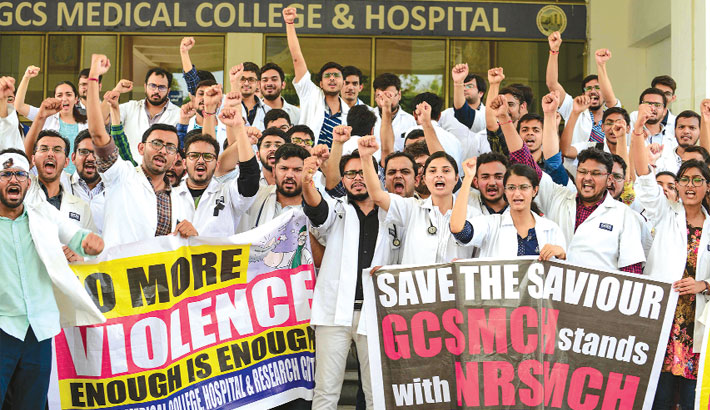 Indian students and doctors of GCS Medical College, Hospital and Research Centre, hold posters and shout slogans as they stage a protest during the nationwide doctors strike held after the recent assault in Kolkata on an intern doctor, in Ahmedabad on Monday. — AFP PHOTO

The nationwide protests, affecting hundreds of hospitals, started after an attack at a medical college in West Bengal state a week ago. The attack left three junior doctors seriously injured after a dispute with a family whose relative had died.

The incident resonated with Indian doctors, many of whom are poorly paid and overworked compared with their foreign counterparts.

The Indian Medical Association (IMA), that represents more than 300,000 doctors and half-a-million junior doctors, medical students and other staff, said almost all of its members, apart from those providing emergency services, have joined the protests.

“Practically, the entire medical fraternity is on strike,” Dr RV Asokan, the IMA’s honorary general secretary told Reuters on Monday. “Everybody is on the street.”

The IMA is demanding tougher punishments for those who attack doctors, as well as higher recruitment to support the overworked staff.

A doctor in an outpatient unit in India often saw more than 100 patients in a day, Asokan said, and despite tens of thousands of junior doctors graduating every year, many were out of work.

“The workload of doctors is inhuman,” he said. “The government is not recruiting enough.”

Doctors, who have been protesting in West Bengal ever since the attack a week ago, were due to hold talks with the government after the state authorities permitted the media to cover the meeting.

There were queues at Ernakulam Government Hospital in the southern state of Kerala on Monday morning, as patients waited to consult the limited number of doctors who were on duty.