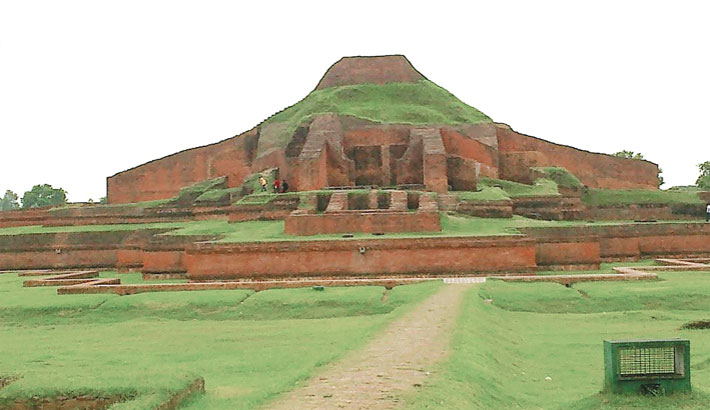 Though it is still unclear exactly when the Buddhism came into Bengal; it has been said that Buddha was here for three months in his lifetime to enlighten people. His profound influence, initiatives of his disciples and monks who followed his footsteps gradually gained the support of the mass. However, Buddhism attained much popularity in the subcontinent during the reign of Ashoka (304 BCE- 232 BCE) the Indian emperor of the Maurya Dynasty (321 BCE - 187 BCE), who ruled almost all of the Indian subcontinent from 268 BCE to 232 BCE. It is found in the travelogues of early Chinese travellers like Faxian (337 CE- 422 CE), Xuanzang (602 CE - 664 CE) etc. that Bengal was predominantly Buddhist and it was endorsed by Gupta (240 CE-590 CE) and Pala (800 CE-1200 CE) empires. The arts, crafts and architectures of this era reached its peak during reign of the Pala kings. Apart from them, the southeast region of present day Bangladesh was also ruled by Buddhist Khadga (625 CE - mid 8th century), Chandra (900 CE - 1050 CE) and Dev (late 12th to 13th century) dynasties.

The earliest site of Mahasthangar meaning a ‘Great place’ is actually the ancient city of  ‘Pundranagar’ as illustrated in the literatures of Maurya, Gupta, Pala and Sena dynasty. Sir Alexander Cunningham discovered the city in the 1879 from the descriptions of the Chinese traveller Xuanzang (602 CE - 664 CE). Finally in 1930, after finding scriptures in a plate, Mahasthangar has been proven as the famous city. It is presently located in the Shibganj upazila of Bogra zila (district) and foundations of ancient structures and relics are still found all over the district.

The rectangular shaped city on the bank of Korotoa River was 1,523 meter in north-south direction and 1,372 meter in east-west. It was surrounded by moats, ‘beel’ (large waterbody) and the River Korotoa. It was the capital of the state of Pundrabardhan of ancient Bengal, and worked as the political, administrative and commercial center. It had a prominent center or citadel for the higher class at the middle, and nucleated settlements for the general people in the fringes.

Xuanzang visited the city in between 639 CE - 645 CE and stated that he saw 20 Buddhist ‘Bihar’s and about hundred Hindu temples. The foundations of some of those places have been found after excavations. Relics from Gupta (240 CE-590 CE), Pala (800 CE-1200 CE) and Sena dynasty (1070 CE-1230 CE) have been found there. But there are evidences of far older structures than those periods.

The first structure from north is the ‘Govinda Bhita’, situated very close to the river. Then there are ‘Bairagi Bhita’, ‘Parasurama’s Palace’ and ‘Jiyat Kunda’ (well of life) within a rectangular enclosure. In the middle portion, there is the ‘Mankalir Kunda’ mound and ‘Khodar Pathar’ mound, which can be accessible from ‘Dorab’ gate or the gate near Jiyat Kunda on the eastern side. There are also few dwellings on the south enclosure and can be accessed by ‘Burir Darwaza’.

Another significant structure, the Gokul Medh, situated about a mile south-east from the citadel revealed a large podium of a Shiva temple. The 43 feet high base is an elaborate cellular construction with 172 blind cells of varying dimensions. 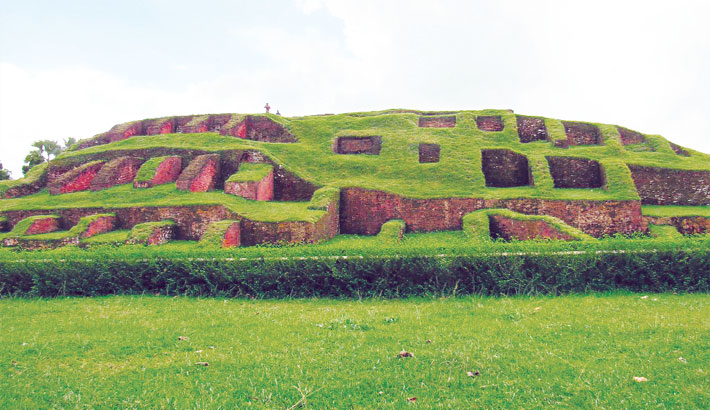 Excavations in the 1960s, digging about 30-31 feets below the ground, found maximum 17 cultural  layers. Evidences of relics from Maurya Empire (322 BCE–187 BCE) and Shunga Empire (185 BCE–75 BCE) have been found. Actually, this is the only place in Bangladesh, where relics from the Shunga dynasty have been found. The number of cultural layers proves there have been human activities even in the Sultani period here. Also, in some of the locations British mints from nineteenth century have been found. But most of the buildings and places have been deserted by then, and in the end the lifeline of the city, River Korotia moved away and  dried up.

Paharpur bihar is not only one of the greatest attractions of the north-east part of Bangladesh, but also one of the most important archeological example of the pre-Islamic civilisation of ancient subcontinent. In fact, it is the second biggest Buddhist monastery situated on the south of the Himalayas. The Buddhist monastic complex was primarily known as Sompura Mahavihara; Paharpur is the name of the village the bihar is situated in. The village is in the Badalgachi Upazila of Naogaon District, around 33 kilometers north of the Naogaon city and around 13 kilometer south of Joypurhat city.

The bihar was established during the Barendra civilisation by the second Pala king Dharmapala Vikramshila during the late 7th century; but it was the early 8th century when construction of the bihar was completed. The complex was built on an area of 70.31 acres. The monastery is a square shaped quadrangle and each side is approximately 920 feet long. The entrance of the complex is on the northern side which directly leads to the big hall situated at the center of the complex. From the inscriptions found at the bihar it can be known that the hall was be used as a central prayer room as well as a courtyard. The complex had 177 rooms or cells; with inwards facing doors and outward walls functioning as the outer wall of the whole complex.

Along with the central complex, there were several other smaller buildings built in the bihar during various time periods. These buildings included votive stupas, a model of central hall, five additional halls, kitchen and refectory. The bihar also had several wells and a water drainage system. 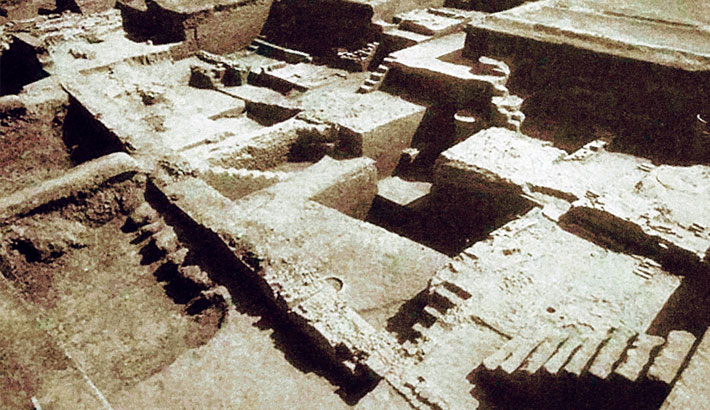 The terracotta encryptions and stone sculptures are now preserved and being displayed at the museum established by the Department of Archaeology, People’s Republic of Bangladesh.  UNESCO included Paharpur bihar in the list of World Heritage Cultural sites in 1985, prohibiting any kind of deformation of the whole area.

Lalmai Pahar (Lalmai Hill), situated in the Comilla division and around 10 kilometers south of the Comilla City is considered as the oldest landmass of the country. According to the archeologists, the soil of Lalmai is over three hundred million years old. This age of the hill range makes it significantly unique since the range is on the bank of Meghna Basin which is one of the youngest landmass of the globe. According to Hindu mythology, Mahabharata, this range was the result of a broken piece of the Himalaya Mountain which fell from Hanuman’s (a Hindu god) hand during the war between Ram and Ravan. Another story prevails that, there was a king in that area who had two beautiful daughters; one of them was named ‘Lalmoti’ and the other one was called ‘Moinamoti’. Later the hills were named after them as Lalmai Hill and Moinamoti hill.

Locals say, the place was reigned by about 34 kings from six dynasties, among them King Boinnogupta, Gopchandra, Dharmadittya and Narendradittya were significant. Documented evidences of the Khadga kings starting from late seventh century to early eighth century, Kantideb and Chandradeb in ninth or tenth century, for a period of 150 years are found. Later, the rulerships of Chandra, Barman, Sena, and few other individual kings like Damodar and Dasharath in late 13th or early 14th century are known until the region was taken over by Muslim administration.

Lalmai and Mainamati are parts of the same isolated hill range. The hill range is around 17 kilometers long from north to south and the widest part of the range is around 4.8 kilometers wide. The hills are clustered and considerably small with the highest peak of only 46 meters. The northern region of the hill range is identified as Mainamati Pahar (Mainamati Hill) while the southern region is named Lalmai Pahar. Along with the geographical uniqueness, the hills hold historical significance as Buddhist monastery as old as the Paharpur Bihar has been explored in this area.

Mainamati Bihar, also known as the Shalban Bihar is another architectural ruin of ancient Buddhist civilisation. During several excavations at this place, relics from 7th to 12th century have been found. The names Lalmai and Mainamati have been derived from the Chandra civilisation. While the first name derived from the Lalambi-vana of Chandra epigraphs, the second one was the name of a Chandra queen. Eleven prehistoric sites have been found as the result of several Archeological expeditions. The most significant findings are Shalban Bihar, Kutila Mura, Charpatra Mura, Ananda Rajer Bari and Mainamati Ranir Bari.  Shalban Bihara is the center of the whole site. It is situated almost at the middle of the bihar and contains a similar structure of Paharpur Bihar. Copper plated inscriptions, stone and bronze sculptures, terracotta, wooden daily usable utilities have been found from these heritage sites which are now stored at the Mainamati Museum. The similarities between the findings of Paharpur and Mainamati Bihar indicates that both of the monasteries were constructed to fulfill the same purposes.