Iran’s enriched uranium limit will be breached on 27 June 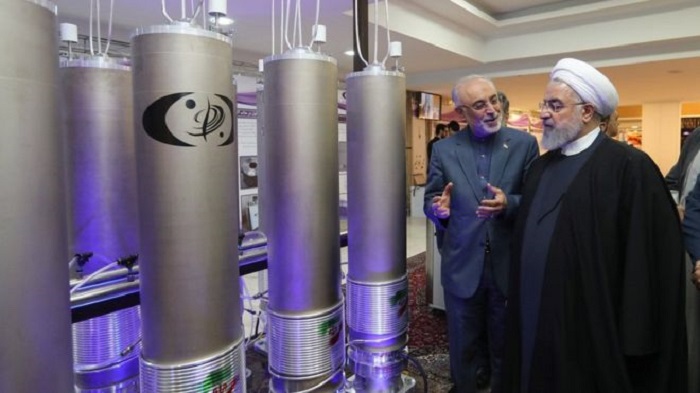 Iran has announced it will breach on 27 June the limit on its stockpile of enriched uranium that was set under a 2015 nuclear deal with world powers.

Its atomic energy agency said it had quadrupled production of the material, which is used to make reactor fuel and potentially nuclear weapons.

But it added there was "still time" for European countries to act by protecting Iran from reinstated US sanctions.

The UK, France and Germany have warned Iran not to violate the deal.

They have previously said they will have no choice but to reimpose their own sanctions, which were lifted in return for limits on the Iranian nuclear programme.

This latest development comes at a time of high tension in the Middle East, with the US accusing Iran of being behind suspected attacks that left two oil tankers ablaze in the Gulf of Oman on Thursday. Iran has denied any involvement.

How significant is this announcement?

In early May, Iran signalled its intention to break out from some of the constraints imposed by the nuclear deal. On Monday, it repeated that threat, adding that the rate of enrichment was being stepped up and that it expected to break the limit on the amount of low-enriched uranium it can hold before the end of this month.

But since its first announcement, the context has changed dramatically with two sets of attacks on oil tankers in the Gulf - both attributed by the US to Iran.

Many fear that Washington and Tehran are on the verge of a military clash and that miscalculation could tip them over the edge.

Iran's further threat today to increase its level of enrichment to a stage that would bring it much closer to "weapons-grade" material adds another element of risk into an already combustible mix.

What is enriched uranium?

Enriched uranium is produced by feeding uranium hexafluoride gas into centrifuges to separate out the most fissile isotope, U-235.

Under the nuclear deal, Iran is only permitted to produce low-enriched uranium, which has a 3-4% concentration of U-235 and can be used to produce fuel for nuclear power plants. "Weapons-grade" uranium is 90% enriched or more.

Why has Iran increased its enrichment rate?

Iran has complained that European powers have failed to abide by their commitments to mitigate the effects on its economy of the sanctions that US President Donald Trump reinstated after abandoning the nuclear deal last year.

Trump wants to force Iran to renegotiate the accord and agree to curb its ballistic missile programme and end its "malign" activities in the Middle East.

In early May, the US stepped up pressure on Iran by ending exemptions from secondary sanctions for countries still buying Iranian oil. The move was intended to deny the Iranian government its principal source of revenue.

Iranian President Hassan Rouhani subsequently announced that his country was scaling back its commitments under the nuclear deal.

This included no longer complying with caps on its stockpiles of low-enriched uranium and heavy water - set at 300kg (660lb) and 130 tonnes respectively - and halting sales of surplus supplies overseas.

Rouhani also gave the European powers 60 days to protect Iranian oil sales. If they failed, he said, Iran would suspend its restrictions on uranium enrichment and halt the redesign of its heavy-water reactor at Arak, whose spent fuel would contain plutonium suitable for a bomb.

On Monday, a spokesman for the Atomic Energy Organisation of Iran told a televised news conference at Arak that the "countdown to pass the 300kg reserve of enriched uranium has started".

"In 10 days' time... we will pass this limit," Behrouz Kamalvandi said.

"There is still time for the Europeans... But the Europeans have expressed indirectly their inability to act. They should not think that after 60 days, they will have another 60-day opportunity."

The Europeans have set up a "special purpose vehicle" that would essentially allow goods to be bartered between Iranian and foreign companies without direct financial transactions. But the mechanism - known as Instex - is not yet operational.

Kamalvandi also said Iran might start enriching uranium up to 5% concentration so that it could provide fuel for its Bushehr power plant, or even up to the 20% concentration required for the Tehran research reactor.

Experts say the technical leap required to get to 90% concentration from 20% is relatively straightforward, because it becomes easier at higher levels. Going from the natural state of 0.7% concentration to 20% takes 90% of the total energy required.

Iran maintains that its nuclear programme is for peaceful purposes.

What has been the reaction?

A spokesman for UK Prime Minister Theresa May said her government had been "clear about our concern at Iranian plans to reduce compliance" with the deal.

"Should Iran cease meeting its nuclear commitments, we would then look at all options available to us," the spokesman added.

The Germany foreign ministry urged Iran to abide by the deal.

Israeli Prime Minister Benjamin Netanyahu, who was a staunch opponent of the nuclear deal, called for international sanctions to be reimposed immediately "should Iran deliver on its current threats".

"In any event, Israel will not allow Iran to get nuclear weaponry," he warned.