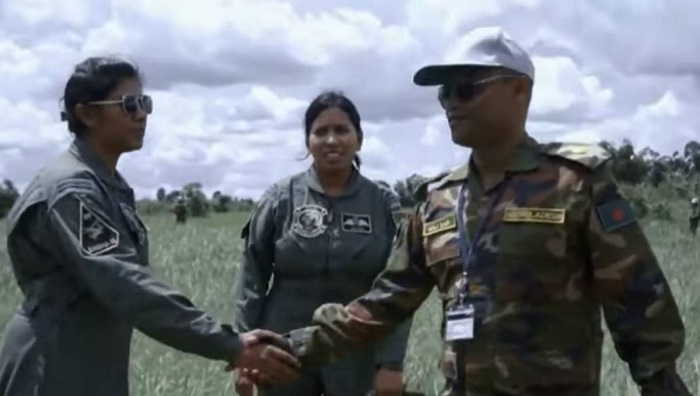 The United Nations (UN) has released a special video featuring Flight Lieutenants Nayma Haque and Tamanna-E-Lutfi who brought much pride for Bangladesh through serving in UN peacekeeping mission as helicopter pilots in the sub-Saharan country Congo.

“I don’t describe myself as a female, I’m a peacekeeper. I’m just a helicopter pilot because machine doesn’t understand who is flying - a male or female,” Tamanna was heard as saying in the video.

Tamanna and Nayma are Bangladeshi’s first female military pilots, serving in the United Nations Peacekeeping Mission in the Democratic Republic of the Congo (MONUSCO).

They strive to be role models for local women and girls while overcoming dangerous challenges in the region, according to the United Nations.

She said as a helicopter pilot they carry out different sort of missions and described their jobs they are performing day to day.

Tamanna said they two were selected as the first two female military pilots in 2014 that was the moment they were very excited because earlier they did not have these kinds of opportunities for females. “We felt very proud that yes, women are going forward.”

These two Bangladeshi peacekeepers do not like to keep anything unfinished.