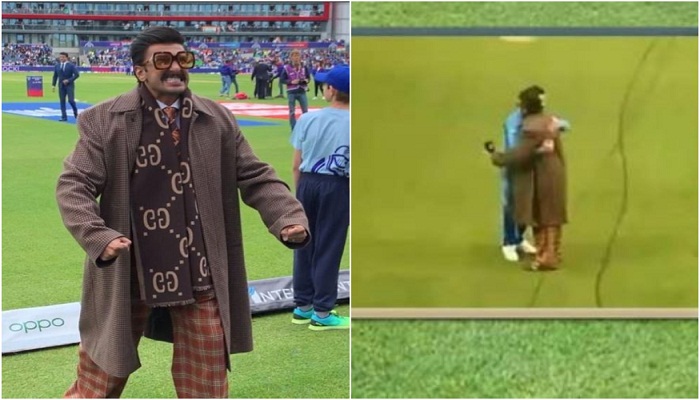 While everyone was glued to their respective TV sets, watching India register its seventh World Cup victory over their arch-rivals Pakistan at Old Trafford in Manchester on Sunday, Ranveer Singh took fans by surprise by paying a surprise visit to the stadium.

As Virat Kohli led team India received applause from all over the world, Ranveer went down to the field and hugged the Indian captain. Watching his adorable gesture, cricket statistician Mazher Arshad tweeted, "Ranveer Singh literally bowed down before Virat Kohli and then gives him a congratulatory hug. Don't think India has produced a more love-able cricketer than Kohli. Deserves to win everything."

Overwhelmed by their camaraderie, while a number of fans hearted out the video, one of them wrote, "I got it. I got the video. Ah, look at them. This is like dream turning into reality. Virat kohli and ranveer hugging each other and having a conversation. I might collapse. This is too much happiness for me."

The actor, who is playing Kapil Dev in the upcoming period sports drama '83, also made his commentary debut, joining Sunil Gavaskar, Virender Sehwag and other cricket legends in the commentator's box.

The BCCI Twitter handle also posted a video of the actor welcoming viewers to the "biggest stage for cricket, the World Cup, and the biggest-ticket match - India vs Pakistan. It doesn't get bigger than this." He went on to say that the weather in Manchester looked promising. "Looks like we might just have the humdinger of a game we're all looking for," Ranveer added.

The Bollywood star's playful antics were quite a hit on social media and videos of Ranveer on the ground were being circulated on the Internet. He also made it a point to strike powerful poses with cricketers like Harbhajan Singh and Sehwag.

As he preps for his upcoming film '83, based on the life of Kapil Dev, Ranveer also caught attention with his retro gangster outfit. He wore over-sized glasses and a checkered overcoat to deal with the chilly weather in Manchester.