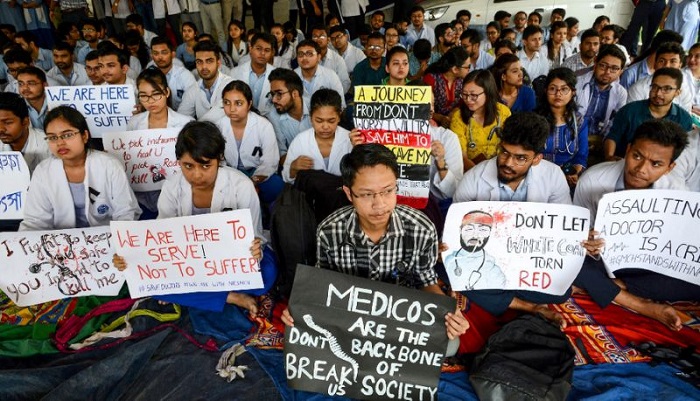 Doctors across India are on a massive strike on Monday in solidarity with their West Bengal counterparts who have agreed to meet Chief Minister Mamata Banerjee on the condition that the meeting is held in the open in the presence of media.

The nationwide protest comes amid new allegations that a doctor at the AIIMS in Delhi was abused by the relatives of a patient on Sunday after midnight.

The Indian Medical Association (IMA) called for a 24-hour-long nationwide protest on Monday that will badly hit medical services across the country.

All non-essential services, including outpatient departments (OPDs, will be closed. The IMA is also set to stage a ‘dharna’ at IMA headquarters in Delhi.

The Indian Medical Association (IMA) launched a three-day nationwide protest starting Friday to express solidarity with the doctors at Nil Ratan Sircar Medical College and Hospital in Kolkata who stopped working in all state-run medical institutions following an assault on two interns.

The doctors began the protest after an intern at the NRS Medical College and Hospital was seriously injured following a clash between junior doctors and relatives of a patient who died late on Monday night due to alleged negligence.

The intern, named Paribaha Mukherjee, sustained a serious skull injury in the attack. Consequently, junior doctors locked up the hospital gates, stopped work at the OPD and started a ‘dharna’ to protest against the attack.

Resident Doctors’ Association of AIIMS will go on strike from 12 noon today till 6 am tomorrow. However, emergency services including casualty, ICU and Labour room will continue to function.

Health care services in the Uttar Pradesh capital will largely remain largely crippled as over 10,000 doctors are on strike in support of their counterparts in West Bengal.

Doctors in Kerala from both private and state-run hospitals too went on a token strike on Monday in the wake of the recent assault on their counterparts in West Bengal.

While medicos from the private sector have opted for a day-long strike with just the casualty services to be made available, those in the government sector would remain off-duty for two hours from all out-patient services from 8 am to 10 am.

Amid protests, Union Health Minister Dr Harsh Vardhan had on Saturday written to the chief ministers of all States and Union Territories directing them to take strict action against persons assaulting medical practitioners.

Nearly 300 doctors have tendered their resignations protesting the assault on medicos at Kolkata’s Nil Ratan Sircar Medical College and Hospital.

On Friday, doctors from hospitals across the country boycotted work to express solidarity with the Bengal medicos. In Delhi, doctors at 15 hospitals including the AIIMS had joined the protest.