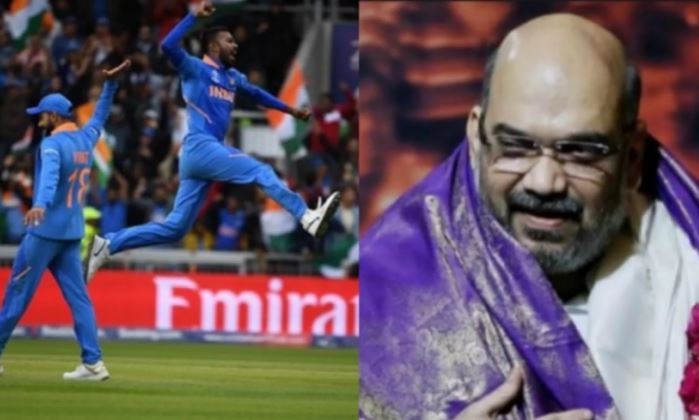 Indian powerful home minister Amit Shah on Monday hailed the country's cricket World Cup win over Pakistan as "another strike" -- months after his country launched air attacks over Pakistani territory in an escalation of tension between the two rivals.

Shah's comments came after India inflicted a humiliating 89-run defeat on their arch-rivals in the much-hyped World Cup match held in Manchester on Sunday.

The long-running political tension between the nuclear-armed neighbours spiked in February over Kashmir, which both Pakistan and India claim and have fought two wars over since the territory was divided in 1947.

A deadly suicide attack -- claimed by a militant group based in Pakistan -- in Indian-administered Kashmir killed 40 Indian troops.

In response, India staged its first air attack on Pakistani territory in decades, with Pakistan responding a day later.

"Another strike on Pakistan by #TeamIndia and the result is same," Shah, considered number two in Prime Minister Narendra Modi's government, said on Twitter.

"Congratulations to the entire team for this superb performance. Every Indian is feeling proud and celebrating this impressive win," added Shah, who heads the cricket association in his home state of Gujarat.

With such a history, cricket clashes are regularly tainted by the political rivalry between the two. Many Indian fans view a win against Pakistan as a matter of national honour, while defeats are looked down upon as disasters.

India beat Pakistan by 89 runs in Manchester on Sunday and have now won all seven of their games against their arch-rivals since the World Cup began.

Veteran journalist, Rajdeep Sardesai, son of a former Indian cricketer, said the match was "a bit like the state of the two countries at the moment".

Sadanand Dhume, an Indian writer based in the United States, said it was a domineering performance.

"In most matters, I believe India should treat Pakistan with maturity and moderation. But in cricket utter and total domination and abject humiliation work just fine," he wrote on Twitter.

Indian newspapers lavished praise on the team, splashing banner headlines and photos on their front pages.

The Indian Express called it a "No match", to underscore how Pakistan were completely overwhelmed.

The Times of India said "mediocre" Pakistan were "stymied by a lack of intent and a disciplined, unyielding performance in the field by the Men in Blue".