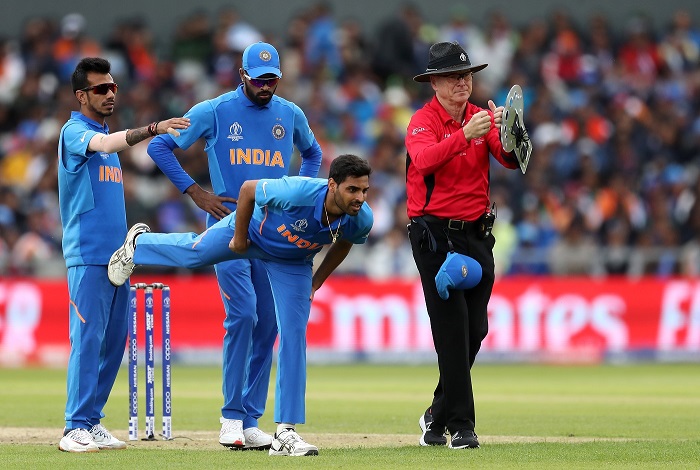 India pacer Bhuvneshwar Kumar will be on the sidelines with a hamstring injury for a "maximum of three games," Virat Kohli confirmed after India beat Pakistan by 89 runs in Manchester.

Bhuvneshwar slipped on the footmarks and pulled up midway through his third over, limping off the field during Pakistan's chase of 336. He couldn't take further part in the match after tightness in his left hamstring.

"Bhuvi's case looks like a niggle, a case of slipping on the footmarks. It doesn't look too serious at the moment and looks like he could recover in a couple of games from now, maximum of three games," Kohli said at the presentation ceremony in Manchester. "He is going to be an important factor for us so hopefully he can recover in time. But we have Shami with us and it shouldn't be much of a worry for us. Even Bhuvi doesn't think his niggle is too bad and that time would heal it."

The remainder of Bhuvneshwar's over was bowled by Vijay Shankar, who struck with his very first delivery to send back Imam ul Haq LBW for 7. Upon leaving the field, the right-armer was looked up by India team physio Patrick Farhart and a decision was taken to keep him off the field, with Vijay Shankar and Hardik PAndya combining to fill for him.

Bhuvneshwar has played a key part in both of India's games thus far - the third against New Zealand was washed out - taking five wickets for a total of 94 runs. India, though, have Mohammed Shami as his pace back up. India also have an injured Shikhar Dhawan in the team, who had been ruled out for 10-12 days after being hit on the hand by Pat Cummins during the game against Australia. He was left out of the New Zealand contest, as well as the one against Pakistan.